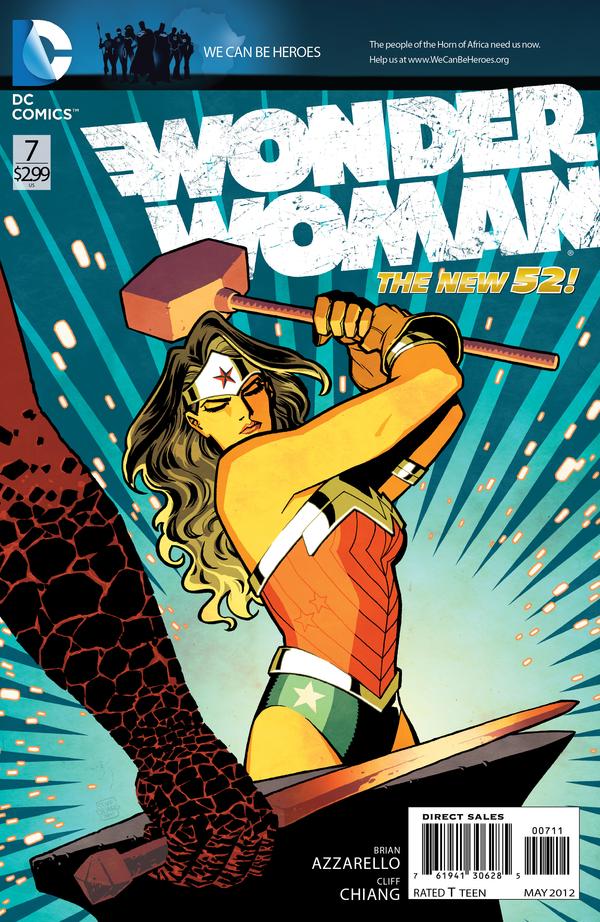 Happy birthday Wonder Woman! Okay, now that we’ve done that let’s talk about the latest issue of Wonder Woman. It’s been at least two issues since last I checked in on everyone’s favorite amazonian princess and it appears as if she’s been quite busy. Not that I haven’t been enjoying this new iteration of Wonder Woman since re-introducing her to the DC New 52, but the run thus far has done very little to keep me from foaming at the mouth for the next issue. Now, not every comic series has to enrapture you so immensely that you can barely contain yourself, but with an icon such as Wonder Woman you really want her to have a fantastic story to tell. Well, it appears as if things are looking up for this reviewer as this latest issue has me very excited about where Brian Azzarello is taking this stunning character.

The cast of cool and exciting characters continues to grow and the mythology angle of the series really seems to be taking shape now that we’ve reached the 2nd arc. With an absurdly cool looking Hades (those candles draped across his skull is just a killer look, I love it) having tricked Zola into the shadows, it’s now up to Diana and her companions to mount a rescue mission of hellish proportions. One thing after another seems to stand in their way as the group does battle not only with mythological beasts, but with their inner selves as well. A lot is hanging in the balance at this point in our story and watching each character (especially Diana) react to it all makes for a very entertaining read.

The pace of the book also seems to be picking up now that we’ve established our cast of characters and a very real threat has been placed upon us. It’s my belief that not every comic book series can start off with a bang. Though, sometimes, and in my experience with Wonder Woman, it just takes a little time before a team can truly present their playing field. Going at these stories month by month can be a little daunting because so much rides on each issue, thereby giving readers a reason to be extra critical. That’s why I make sure that each time a new issue of a series is released I go back and re-read from the beginning of that arc if I can help it. And so with Wonder Woman I’m finding that the more I immerse myself into her world the more I am finding that it is truly something to behold. If you’re not reading this run of Wonder Woman inside the DC New 52 now might be the best time to jump on board.

The pacing of the new arc is really something to be excited about. If you weren’t on board with Wonder Woman when she first came onto the scene of the DC New 52 you might want to think about giving her another chance. I’m really enjoying the new sense of energy and action happening in these pages.