PLOT: Five friends decide to take a trip to a remote cabin in the woods. What starts out as an innocent weekend of fun, turns into something much more sinister and the group get much more than they bargained for. In order to survive their trip, they must find out what’s really going on and unlock the secrets that the cabin holds. 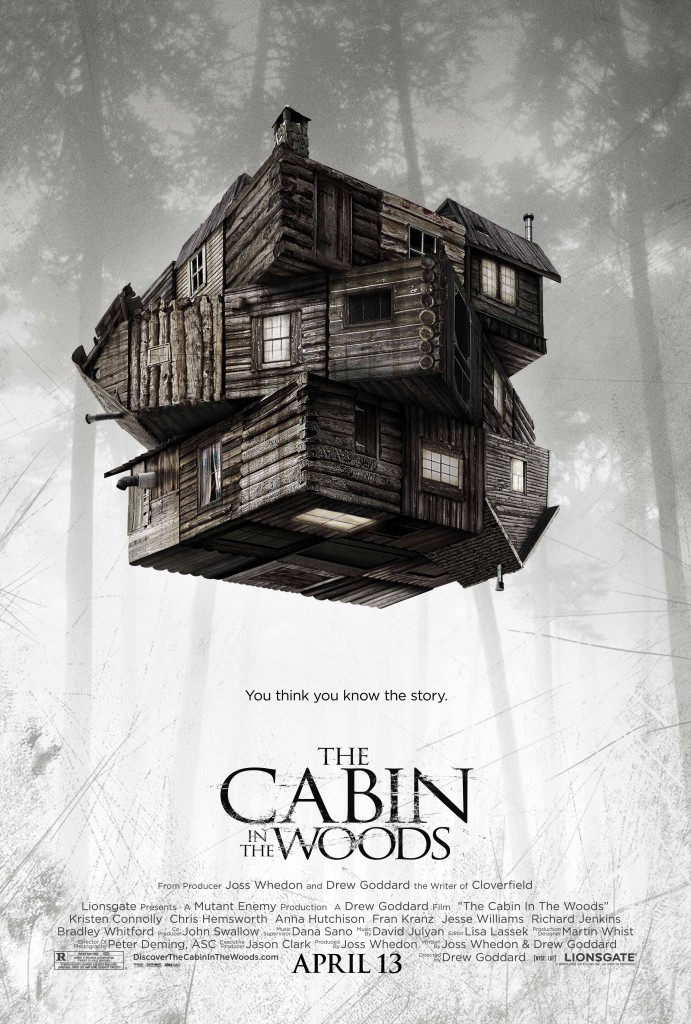 REVIEW: When it comes to horror movies, I’m probably one of the biggest wimps out there. My parents raised me on fluffy movies and TV shows and as a result, I’m not as desensitized as the rest of the world… therefore horror movies are still manage to scare the crap out of me. I don’t hate the genre in any way, shape or form, but I’ll almost always choose a different movie to watch than something horror-ish.

When it comes to Cabin In The Woods, I knew I would have to make an exception since geek god Joss Whedon helped bring the film to the big screen. Alongside fellow Buffy and Angel writer Drew Goddard (who directs this film and also wrote Cloverfield as well as episodes of Lost), Whedon set out to create a true passion project with Cabin In The Woods. I was lucky enough to get to sit in on a Q&A after the film with Drew Goddard who filled us in on the movie a little bit. I don’t want to give too much away, but the film is basically a brilliant ode to every awesome horror film you’ve ever seen. If you’ve ever seen any episodes from Whedon’s Buffy the Vampire Slayer, you’ll kind of know what you’re getting into… and yet nothing can quite prepare you for the film that this is.

Cabin In The Woods was initially filmed and created a few years back, but it got stuck behind red tape when MGM went bankrupt. When the tape was finally lifted, Whedon and Goddard worked feverishly on getting the film to the theaters ASAP. This past summer, superhero action flick Thor joined the ranks of good superhero movies and bringing the character to life was Chris Hemsworth. Before Hemsworth was Thor, Goddard and company cast him as Curt Vaughan in this film. Joining Hemsworth are Jesse Williams, Kristen Connolly, Anna Hutchison, Fran Kranz, Richard Jenkins, Bradley Whitford and Amy Acker.

When you hear the name Joss Whedon associated with a film, it’s automatically going to bring forth all the geeks and nerds of the world. From the trailer, it seemed a little different from other things that we’ve seen Joss do as of late. Let me take the time to reassure you that fans will not be disappointed with this film. It perfectly combines comedy and horror into one incredibly well written and one exceptionally well thought out film. Whedon and Goddard’s love for this project shows through and through and I found myself simultaneously covering my eyes from the fantastically built suspense and laughing hysterically at some of the quippy dialogue that was thrown in.

There’s so much I want to say about the film but part of Cabin In The Woods’ charm is in its twists and turns. There are so many video game references and other film homage’s to look out for, but I really can’t go into much more detail without spoiling parts of the film for you. The trailer does a good job of vaguely telling you what the story is all about and leading into a film that you may not expect from it. Try to avoid as much as you can about the film and just go in seeing as little footage as possible… it’ll make the movie that much more fun.

VERDICT: If you’re a Joss Whedon and/or Drew Goddard fan, this movie is something that you absolutely must see in theaters. Not just once, but at least twice… you’ll want to go back in and watch it all over again after it finishes. Unfortunately for me, I have to wait until it’s release date of April 13 to check it out again, but I’ll tell you right now, the movie is around 90ish minutes long… I would consider setting aside a 3 hour block of time so you can see it all over again right afterwards. It’s fun, it’s nerdy, it’s everything you could possibly ever want from a horror film wrapped up with a bow on top.