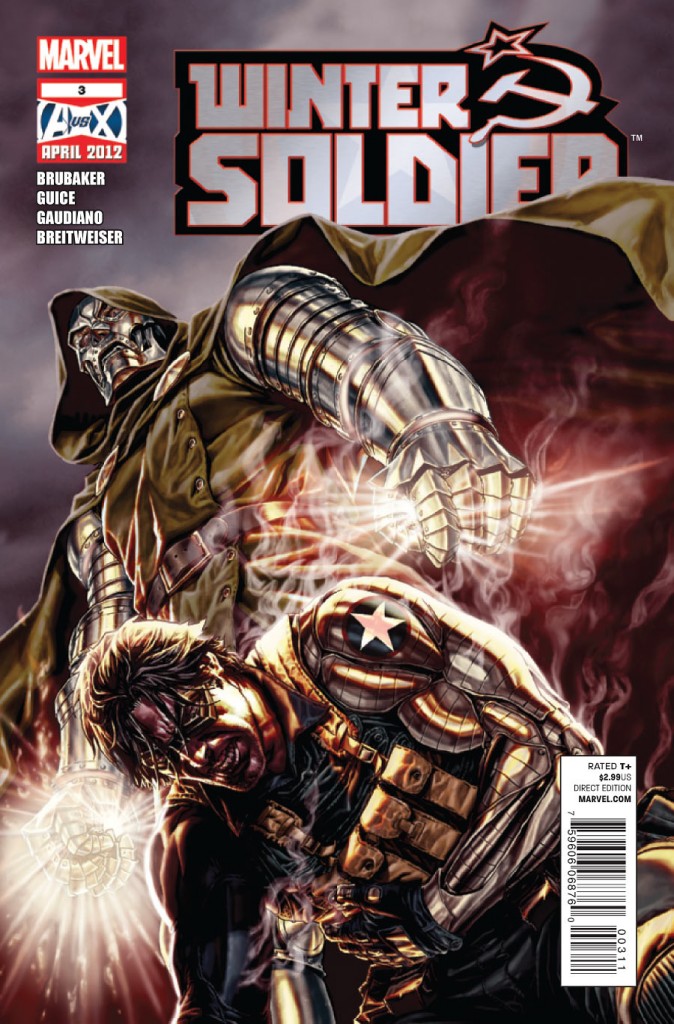 Ed Brubaker’s winning streak as steward of the Captain America line of books continues on the latest issue of Winter Soldier, the third chapter in “The Longest Winter” story arc. It’s a ripping-good spy yarn, with a soupcon of old-time Marvel villainy in the presence of Professor Ivan Kragoff, The Red Ghost, whose first appearance was way back in Fantastic Four #13.

To briefly re-cap the story so far, James “Bucky” Barnes & Natasha Romanov (The Black Widow), find themselves confronted with the remnants of a Cold War era Soviet program of sleeper agents (trained by Bucky himself!), that has been re-activated by Ivan Kragoff.

Issue three takes us deeper into the intricacies of this labyrinthine plan, as we’re fully introduced to Lucia Von Bardas (via a fabulous two-page spread!) and her re-programmed Doombot, through whose actions she’ll ignite a possible world-wide conflagration. There are many twists to this that I am loathe to relate, but suffice it to say, it’s a set of Russian matryoshka nesting dolls at play here, with one scheme within another.

Mr. Brubaker’s writing, as ever, takes us through the layers of this story without ever losing the forward thrust of the over-all concept, all the while adding depth, and unexpected good humor, to his characterizations of our two leads. A major point that, as before he resurrected Bucky, and saved Natasha from a fate as one of the “Good Girl/Bad Girl” cover brigade, these two were definitely on the “Out” list.

The art, by veteran craftsman Butch Guice, whose career began with The Micronauts in 1982, and has included stints on nearly every major Marvel or DC character since, is perfect for this book and top-hole. The pencils are beautifully moody, but it’s the panel arrangements that ring the bell for me, featuring cinematic cutaways to close-ups during exposition, and dynamic, tumbling lay-outs during action sequences that never lose the “geography” of the moment.

As a whole, the art and writing compliment each other so well, they give you at once a sense of the familiar, while being completely fresh in approach and execution. This is how to keep classic characters new and interesting, while retaining their core appeal.

Don’t dismiss this as yet another super-hero book—it’s a classic spy thriller that just happens to be top-lined by two characters that are swiftly becoming one of comic’s most interesting couples.

If you’re not reading Winter Soldier (or Captain America for that matter!), start immediately! Brubaker & Guice are in grand form here, crafting an intricate mosaic of a tale, highlighted by deft usage of iconic characters, and one that satisfies at all levels. Highly Recommended.