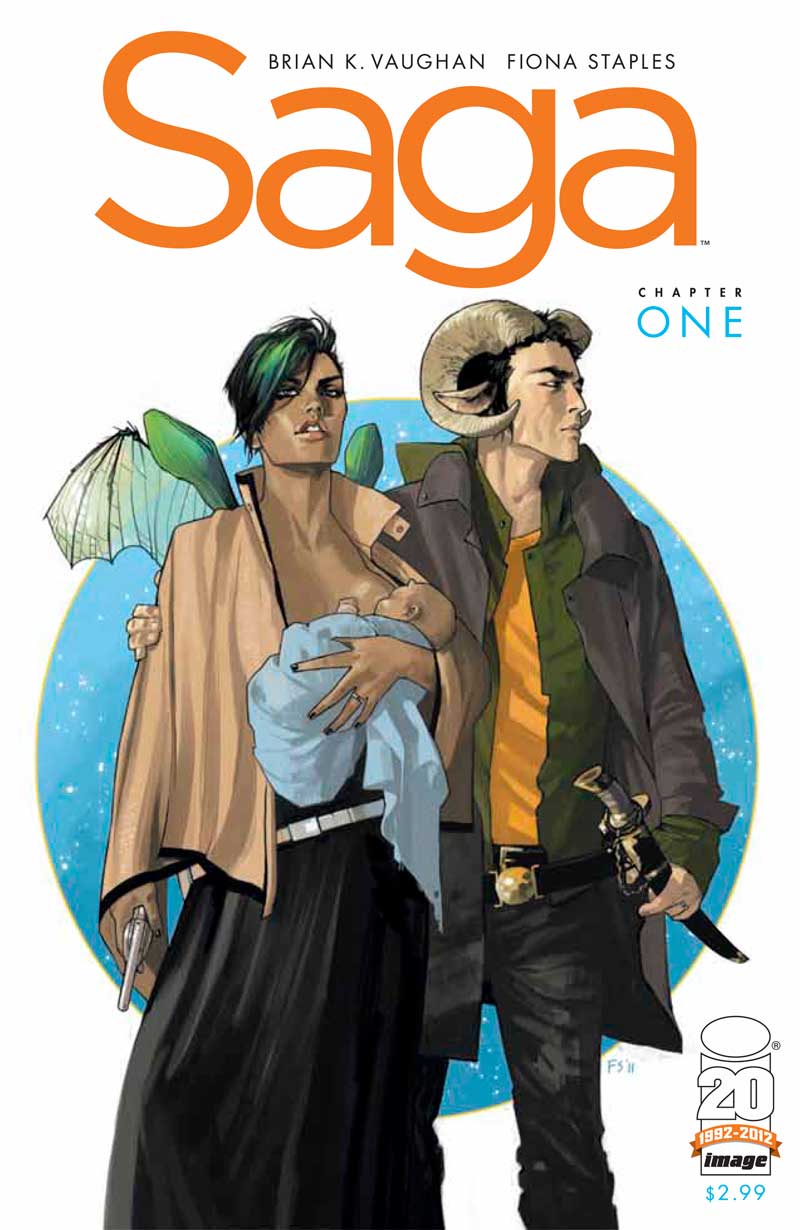 Hands down, the #1 comic that I was most excited for this year was Brian K. Vaughan and Fiona Staples new ongoing series Saga. For anyone who has listened to the podcast before, you’ll likely know that I can’t get enough of BKV’s work (with the exception of that one Batman book, False Faces); I’m a huge fan of Runaways, Ex Machina, Y: The Last Man and one-off TPB, Pride Of Baghdad.  So when I say that the draw to this story is Fiona Staples’ incredible artwork, I want you to realize that this is a big deal for me. Let me continue that thought by saying that BKV’s writing is in no way bad in this first chapter of Saga, but it’s just overshadowed by an exceptionally talented artist who brings so much to the table.

For those of who haven’t been followed the previews and all that, Saga is a sort of Romeo and Juliet-esque story that’s set in a galaxy far, far away. There’s an endless war raging on and two lovers are caught in the crossfire when they decide to marry one another, despite their races being mortal enemies. Alana and Marco further complicate things by bringing a baby into the world and basically this story revolves around the birth and trying to get us familiar with the characters and building up the elaborate setting where this all takes place.

Admittedly I was a bit overwhelmed with trying to figure out who was who during my first read and I had to go through it a second time to really dive into the politics behind it all (which I’m still a little bit fuzzy on since it is only the first issue). However, the story flawlessly flows between Marco and Alana’s perspective to the perspective of their respective authorities. Occasionally we even get some narrative from the baby, as she looks back on her life and what her parents did to keep her alive and safe (the extent of which I’m sure is yet to come).

Now, this comic isn’t going to be for everyone… while it’s absolutely stunning to look at and it’s brilliantly told, if this were a movie, it would most definitely have an R rating. There’s swearing, nudity, sex scenes (panels?) and other miscellaneous naughty bits not suitable for young eyes. But if your eyes are not so young and not so innocent, gaze away at the breathtaking series that will be available at a comic book store near you very shortly (as in on Wednesday).

Buy the crap out of it… With Brian K. Vaughan and Fiona Staples behind this story, you can’t and won’t go wrong in putting your money in their exceptionally capable hands.