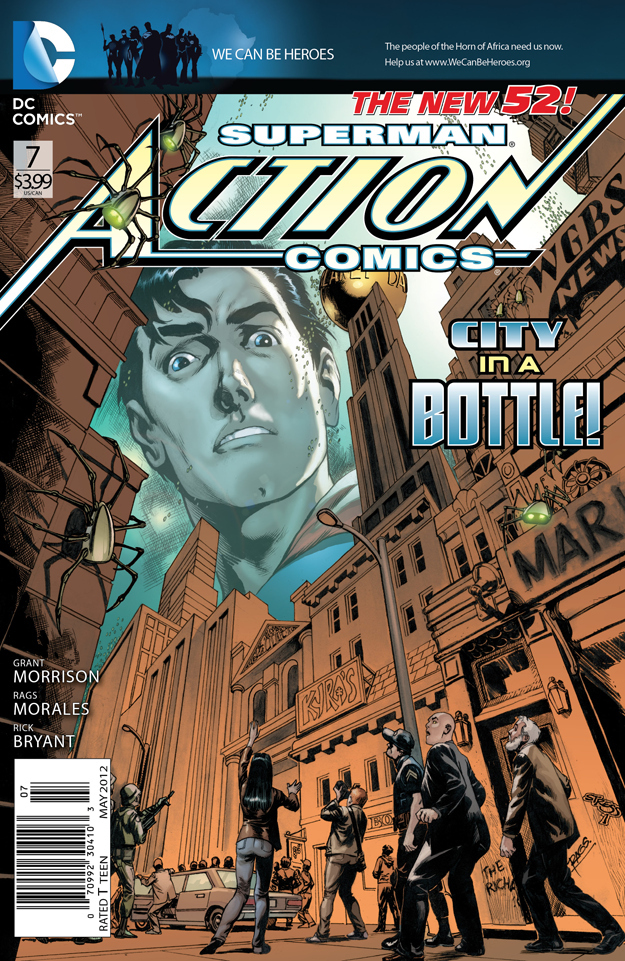 We’ve always accepted that the world loves Superman and, that he in turn, feels an overwhelming responsibility to protect said world. But until Grant Morrison’s current run on Action Comics I’ve never really seen a compelling answer as to why this is. Why would this alien being, no matter how moral, feel the need to solve the problems, not just in his home town, but on an entire planet? Why would a civilization so known for it’s fear of the unknown and powerful, accept a being like Superman as fully as they have? If you look at the comic canon most heroes are feared or misunderstood and they have a tenth of the power that Supes does. Morrison strives to give us an answer to both those questions in Action Comics #7, and in doing so returns to what made this book so special when it launched back in September.

The raw events of the book, which include Superman figuring out how to get into space without the power of flight, are bold and brash. But all of that would be empty action without the context Morrison lays upon them. Here he crafts a story where each of the undertakings that Clark Kent attempts feel like genuine steps towards becoming the greatest hero the planet has ever known. There is a great line in the book where a character tells Superman that he has to run a speed he’s never achieved to get out of the atmosphere, and our hero simply responds, ” I’ve never had to run faster until today.”

The chief complaint leveled against Superman is always that he is too perfect, too powerful and too much of a boy scout to be relatable to the everyday man. But, by making him strive for more, and by making him strain to conquer problems bigger than himself, I believe Morrison has begun to slowly eliminate these criticisms. Rags Morales continues to bring The Man of Steel to life in a style that is classically beautiful and, yet, full of modern complexity. My only criticism is that when the book leaves Clark to deal with Lois and Lex Luthor, it loses a lot of it’s sizzle and pop. These scenes feel like filler content and don’t really serve to tell us anything except that Luthor is a snake. These are small criticisms when compared to the hutzpah that Action Comics #7 brings to the table. Older fans might balk at these reinventions, but if you want to see a compelling story about how Superman became who he is, then this is your book.

Buy It – After a dalliance into Superman’s modern adventures, Morrison returns to the beginnings of our hero and the book is the better for it. The story is well paced, action packed and full of revelatory plot twists. The issue also marks the return of Rags Morales’ wonderful art to Action Comics and, while Andy Kubert did a great job the last few issues, it’s good to have him back. The only dips occur in the Lex and Lois interactions and in the backup to the issue. These pages are well written and beautiful to look at, but they don’t serve to establish anything new or pay off anything old. Other than that this issue is a total win!