Hello there geeks! Hope your Friday is shambling along happily, filling you all with bubbly excitement for the weekend ahead. I’m going to apologize now for the shortness of this week’s Power Punch. I’ve had some very big, overwhelming things happening in my personal life this past week or so which have kept me from focusing as much on the world of nerdy news as I like to. No matter how much that world outside my computer screen demands of me, I will always strive to provide you with the biggest, coolest stories that I can dig up. Besides, I’m sure you’re all busy playing one particular game this week and would prefer that nothing (not even me!) take up more than a few minutes of your precious cerebral energies.

Galactic war! New fangled weapons all customizeable with your very own lasers and potato shooting super cannon powers! Dark, dangerous alien terrains with hard to pronounce names! Make decisions that create the story and feel like an ass when you make the wrong choice and doom an entire planet! Booms! Bangs! Splosions! All this and more is waiting for you in Mass Effect 3, Bioware’s latest addition to their hugely popular shooter. EA Games claims to have sold around a bajillion copies of the game in the first 24 hours after release. Myself, I’m not a big fan of intense battle, shooter based games, but it does look cool as hell and well, half of the world is obviously playing it so there must be something awesome there. Get it now! Lock your doors! Be one of the cool kids! 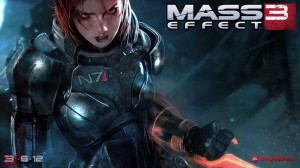 One very handsome, very funny, very tall host of one of my personal favorite shows made a big announcement this week about another of my favorite shows and it was so exciting! Ok, I’ll tell you. Joel McHale gleefully announced the return of a new season of Community, which if you haven’t seen it (where the hell have you been?) is one of the smartest, most entertaining sitcoms in tv land today. Fans everywhere moaned in grief a few months back when rumors began flying that Community was on the chopping block. The show was  highly loved, although strangely underrated, and NBC dared toy with the idea of dumping it in favor of a far less popular show (Whitney). McHale was also gracious enough to premier an action packed, tense, riveting trailer of what’s to come in the new season, which I have provided for your enjoyment. Oh, yays!

A Round on me, for the tweeps!

So, there’s this little festival happening in Texas called SXSW (South by Southwest), during which all sorts of up and coming things are promoted and fawned over including music, technology, personalities, comedy and beer. Oh, beer is a big part of it. This year, it’s even bigger, thanks to the official premiere of Tweet-A-Beer. How many times have you found yourself cyber ‘cheering’ a twitter pal for something amazing (or just ridiculous), doing your best to enjoy clinking a cold one using only your imagination and perhaps a witty *clink*? All the time, right? Now you can buy your tweeps a beer through an ingenious app that links your PayPal account to your twitter via a safe ecommerce platform, allowing you to buy or donate ‘beers’ in $5 allotments. Networking has never been so easy or so sloshy! Now, if only someone would make one of theses apps for cupcakes, I’d be set.

It’s got a camera, a fancy new screen and it’s expensive. It’ll be for sale on March 16. Blah blah blah.