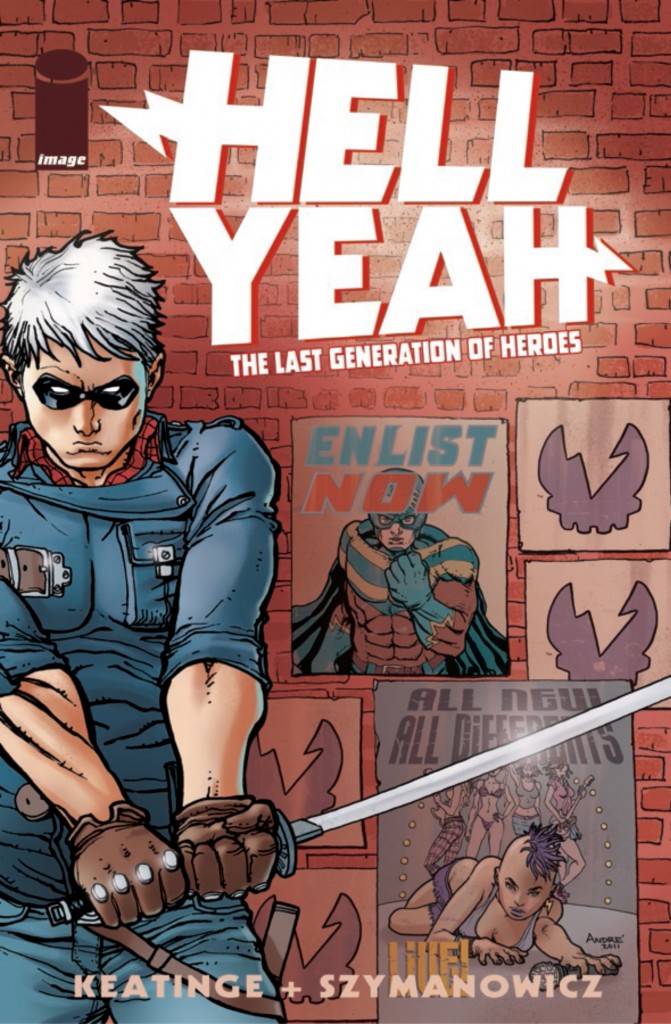 When I was kid and I first started reading comic books I would marvel at the exploits of the god like heroes that propagated their pages, but one nagging question always fluttered in the back of my mind. If they were so powerful why didn’t they fix all of the bad stuff that was going on in the world? When I first started reading comic books the first Iraq War was happening and I remember thinking, why in the comics would Superman not just fly over there and stop it? That is where Hell Yeah steps in and although it doesn’t get everything right it does present some of the most entertaining ideas I’ve seen in a number one this year.

The story is that of Benjamin Day an angry teenager who is son to one of the most famous people in the world. His father was an American soldier in the first Gulf War who is saved from execution by a group of super humans.  This is big news around the world because these are the first super humans to show themselves in history. This coming out party shifts the dynamics of the Earth as we know it. Now super humans are born every day and so the world has had to erect superhero academies for them to attend. Our lead character attends one such institution.

Benjamin Day is not the most likable lead character in the world. He seems to come bundled with the stock “chip on his shoulder” attitude that every fictional son of a famous person has. This rebellion against authority doesn’t have any weight or context, because we are not privy to Benjamin’s life before the first page of the book. I would assume that in the future we will get filled in on why he is the way that he is, but when you are launching a new series, I think it’s important to make your lead as arresting as possible. Right now, Day just seems spoiled and angry and those are not traits that often endear a hero to an audience.

Where writer Joe Keatinge does get his story right is in it’s mysterious and engaging plot. There are a lot of hanging plot threads in Hell Yeah #1 and all these enigmas could lead to the story feeling over crowded and muddled. But Keatinge does a masterful job of making each quandary feel like it’s organically connected to the plot. The result is a story that is easily digestible, but still intriguing. I also found myself enjoying the novelty of having Benjamin being best friends with “the world’s smartest girl,” and the implications of a possible time travel conundrum. I was slightly disappointed that it isn’t quite clear what super powers Benjamin has, or what exactly the world at large thinks of its superhero peers, but those are things that can be explored in future issues. Overall Hell Yeah #1 was a a great read and I highly recommend it.

Buy It – Hell Yeah #1 is an imperfect book that is full of big ideas, with great story hooks and an intriguing time bending mystery. Its only major weakness is its angst ridden main character.