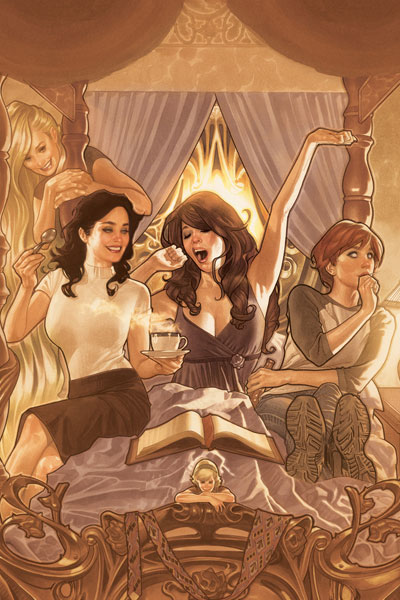 Not too many people believe in fairy tales these days. The world is a harsh place and in every dark corner of of our globe lurks another unfortunate circumstance able to bring even the strongest of spirits to their knees. It’s within fairy tales that we’re able to escape these realities. Whether it be watching the clock with Cinderella, hoping for true loves kiss for Snow White, or traveling down a twisted rabbit hole with Alice, fairy tales have always been able to reflect the inner most desires of man and present them in such a way that they appear fantastic and inviting. Such is the case with best-selling, award winning creator Bill Willingham’s Fairest #1.

Fresh from the pages of Fables comes the premiere issue of an ongoing spin-off staring the females of the Fables universe. Fairest finds us exploring the secret histories of Sleeping Beauty, Rapunzel, Cinderella, The Snow Queen, Thumbelina, Snow White, Rose Red as well as many others. This first issue finds us in the guise of Ali Baba himself as he ventures into a goblin encampment alongside a wise cracking bottle imp. The often hilarious imp has promised Ali that the greatest of all treasures awaits him inside the camp … he just needs to get inside. With unknown plans of his own, the imp and Ali share a small scale adventure and trade witty banter back and forth throughout each page of this introductory issue. Things take a magical turn for the fantastic (as they often do in the world of Fables) when Ali discovers that there is more than meets the eye as he gazes upon the treasure set before him.

Now … if you’re new to our site allow me to let you in on something about myself … I have what some would consider an almost unhealthy obsession with fairy tales. I find the stories of The Brother’s Grimm (as well as others like them) are some of the most pure and entertaining contributions to the written word in our literary history. What Fairest #1 does is reintroduce us to a fantastic world where anything can and will happen. Willingham has had a masterful handle on this enchanting brand of comic book storytelling for quite a number of years. It’s because of this that Fairest is the product of a very refined approach to the crafting of tales involving some of  literature most famous characters. I am overjoyed at having the opportunity to jump in on both Willingham and Jimenez‘s  from an issue #1 perspective. The book makes me feel like I’m right there inside of a world where the impossible is lurking around each and every corner. There is danger, monsters, and true love to be found inside the pages of Fairest and I have no doubt that we’ll be sharing many happily ever afters as this series continues.

Buy it. There is no better time to dive into the whimsical writing of Bill Willingham and the gorgeous pencils of Phil Jimenez than right now. Go pick yours up before you have to wait for the inevitable 2nd print off.