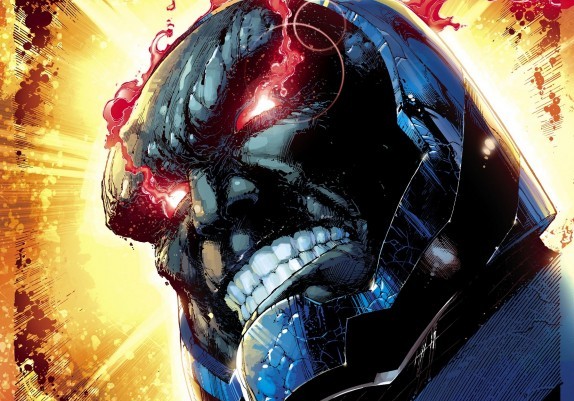 It has taken me a full six issues to fully understand my problems with Justice League, but now its shortcomings have become abundantly clear. The first, and most egregious, is that this book just doesn’t have the weight of something that is supposed to relaunch a universe. If you were to take out the mentions of the heroes “not knowing” each other and if you gave Batman a leadership role this story could be numbered Justice League #76-81 instead of #1-6.

Don’t get me wrong there are glimmers of greatness in Geoff Johns and Jim Lee’s flagship title. Justice League #6 starts off with a powerful piece of narration told, not by one of our heroes, but by a normal man who is experiencing Darkseid’s invasion first hand.  This perspective shift gives the story a jolt of energy and uniqueness that it has been lacking. But, like the other bright spots in Geoff Johns’ first arc, this shining moment is quickly replaced by empty histrionics. This is an unfortunate development because there was a real chance  to reshape the well worn territory of the JL in this initial run, but thats obviously not something our creators are interested in. Moreover, this hum drum storytelling casts a shadow over the entire DCU because it makes what once felt like a bold move by DC now feel incredibly familiar and safe.

Johns has put himself behind the eight ball by making his story solely about the conflict his heroes are engaged in. On the surface this would seem like a good idea because the fights depicted are brutal, inventive and beautiful to behold, but this tact falls apart when you realize one simple and harsh truth. Superhero vs. supervillian, except in very  special circumstances, is a predictable and boring confrontation. The League’s battle against their god like foe is a fight that lacks drama or suspense. Do you want to know why? Because the heroes always win and the only way to circumvent this narrative loop is to make us care about the men and woman behind the masks. They have to be  fighting for something not just against something. Johns never gives us anything more than a generic “saving the world” motivation for our heroes, and that is too obtuse a concept to care about. 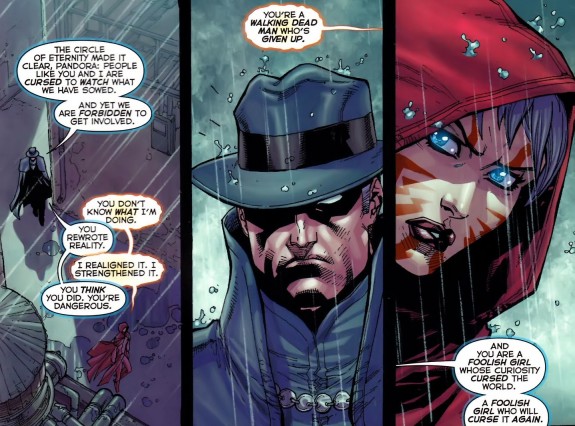 I was ready to completely write off the arc until I read backup to the issue entitled Pandora. This tantalizing tale finally sheds light on the mysterious woman in red who appeared in the finale of Flashpoint and in all of the New 52 #1’s. These few pages are surging with an energy and freshness that hasn’t been present in Justice League proper and is the best writing I’ve seen from Johns in the entire six month run of the rebooted universe. Pandora is a promising character with an intriguing mission and I’m excited to see how it integrates into the main story. That being said, Johns is currently on a very short leash and I will not stick around for much longer if the book does not improve.

Justice League #6 is littered with missed opportunities and poor decisions. The narration that bookends the story is powerful and fresh, but its abandoned for bog standard superhero vs. super villain fair that is flat and boring. The mediocre writing is made all the more shameful because Jim Lee’s art is as stellar as ever. (There is one splash page in particular will make fanboys coo with delight.)

If you have read the first five issues I’m sure you will purchase this, but I cannot in good faith recommend it. When Geoff Johns is on he is one of the best superhero storytellers in the business, but this feels like paint by numbers writing. The book is only saved by its intriguing and expertly crafted back up. For this reason and no other I say wait and see on Justice League #6.