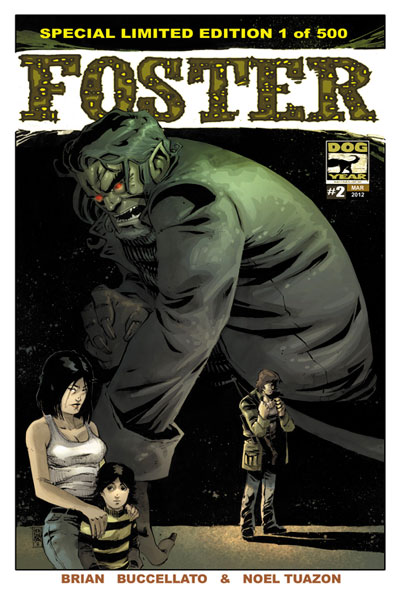 As a fan of any medium there is often a large gulf between where you, as the reader, want a story to go and what the author’s vision for their creation inevitably is. This dissonance can often lead to an unwarranted and disproportionately negative response from fans and critics alike. During my initial read through of Brian Buccellato’s Foster #2 I found myself experiencing that gulf between expectation and execution because the book unfurling before me was not the one I had pictured in my head.  When that reaction occurs it’s always wise to experience the book a second time. This case was no different because once Foster #2 had the weight of unfounded expectations lifted from around its neck, it showed itself to be, while not as electric as the first issue, a book that offers up solid character relationships and an excellent sense of place.

The heart and soul of Brian Buccellato’s book continues to be the relationship between the titular Foster and troubled Ben. These characters are essentially mirror images staring at each other  across a 20 year time gap. Foster let the emotional demons of his childhood turn and twist him into something he doesn’t like, and he sees his internal issues externalized in Ben. There is something heartbreaking about watching a child lose his innocence and that pain is reflected in Foster’s rabid determination to protect him.

I also love that despite the extreme situation they are in that these characters continue to exhibit the same weaknesses and joys they would in their normal lives. It ranges from the look on Ben’s face when he gets to go see a movie he’s been wanting to check out, to Foster succumbing to a vice that nearly leads to tragedy. Either way it creates a foundation for a reader to become fully invested in the people on the page.

As I said earlier a lot of my initial reservations with Foster #2 went away on my subsequent read, but even after that second go around a few key problems remained. My biggest gripe with the book can be broken down into one very simple and often used phrase: “Show, don’t tell.”

Foster #1 held its cards close to the chest, only allowing the reader precious snippets of information about the threats that surrounded our main characters. Comparatively, Foster #2  has gone all in with its hand on display for all to see. We quickly go from knowing next to nothing about our antagonists to having a scene focus completely on them. In this scene Buccellato tells us the Dwellers are ferocious, that they don’t care for authority and that they are content living in the shadows, but he does it by simply having those characters say it. This over use of exposition robs the reader of that joyous sense of discovery that was prevalent in Foster #1.

Buy It – Despite my complaints Brian Buccellato’s Foster #2 is still a very good book. It’s got a unique and retro art style, great sense of location and a story that continues to reveal interesting wrinkles. Buccellato has all ready established an amazing sense of place in his book and here he begins to expand that world. The ratty subway, the monoplex, and even the science facility make the city feel alive with its own personality. What remains the best thing about Foster though is its commitment to emotional honesty and well developed lead characters.

The only thing holding back this book from being one of the greats is Buccellato’s tendency to try and tell us too much too quickly.  I say this knowing that storytelling in this medium is an ever changing an ongoing beast, and that too much exposition right now maybe what’s needed to unburden the story later. If that ends up being the case, and I sincerely hope it is, I will gladly own up to it. For now I can only say that Foster #2  is an extremely solid tale that doesn’t quite live up to the last issue, but is never the less well worth your money.