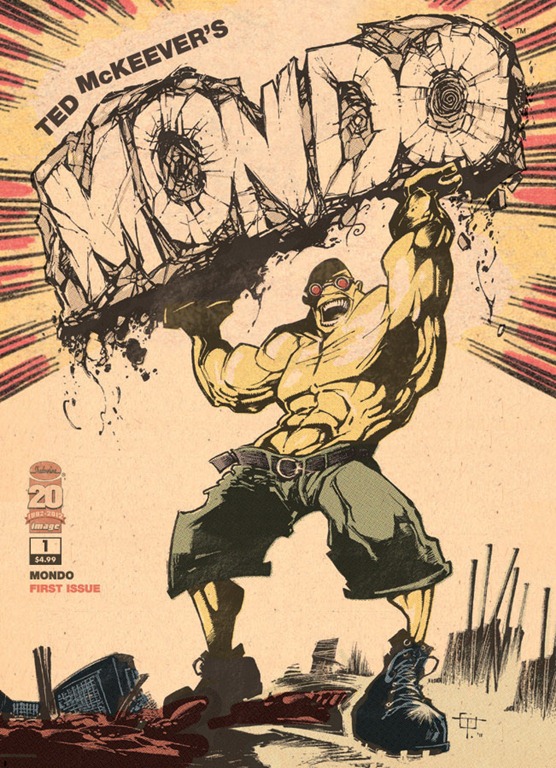 Um, okay … I’ll be honest, I really don’t know what to think of Mondo #1. As far as I can tell it’s a black and white comic book about a rather unkempt employee of a frozen chicken factory, that after an unfortunate accident, may or may not have gained super powers? Confused? Yeah, me too. I really don’t know if there is much that I can say about Mondo #1 other than that I was really confused as to why there wasn’t more or it for a first issue comic. First issues are supposed to not only set up your characters and story, but also bait you with the promise of “can’t miss” events to come. I just wasn’t feeling that from Mondo #1. Sure, I got a sense of tone for the book, and the black and white artwork was actually rather fun (I prefer my comics to have a splash of color, personally.), but nothing about the book really stood out or made me want to pick up the next issue.

I think that, often times, first issues toy a little bit too much with the promise of what’s to come. Sometimes, more often than not, you really have to put something out there to grab your readers. I don’t really enjoy a comic that even though it’s trying to establish a mood, had taken all of it’s 20 some odd pages to get to the really good part. There just doesn’t seem to be much of an intensive to keep reading. The only straw that I’ve been given to grasp onto is the prospect of maybe beating the shit out of some rude co-worker thugs, but is that really enough to make me want to spend my $2.99 on another issue? Sadly, not really.

Perhaps I’m being a bit harsh, but I have to go with my gut reaction here and just say that Mondo might not be for me. Call me ridiculous, but I really find it hard to enjoy black and white art comic books. Sometimes it works, like in the case of Robert Kirkman’s The Walking Dead, and I’m sure that there are countless other examples as well, but, as a fellow artist, I really do enjoy colors and almost need them in my comic books.

I’ve seen that a lot of other reviewers online have really enjoyed this first issue of Mondo, unfortunately, I am not one of them. There’s nothing particularly “wrong” with the book, and I certainly may be the minority here, but I just couldn’t get into it. Whether it’s the lack of a strong characters to latch onto, the lack of color, or the bizarre presentation of the story, I’m just not very excited for another issue. Check it out if you don’t mind black and white art or are perhaps a fan of McKeever‘s work, but it’s just not for me.