Whether your walking into your  local comic book shop or perusing your favorite digital store front, sometimes it’s tough to know what books are safe for new eyes. That’s where we come in! Part review, part column, Start Reading Here is a feature on Talking Comics that let’s you know when you can jump onto a long running series. This week we say you should start reading: 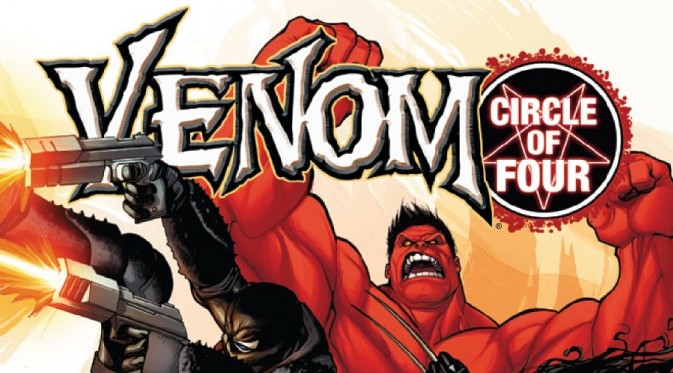 Venom: Circle of Four is a five part series that began in Venom #13, will run every week in February with issues 13.1, 13.2, 13.3, 13.4 and then will wrap up in Venom #14. It’s the story of a supernatural disaster occurring in Las Vegas, orchestrated by the demon Blackheart, which the unlikely team of Venom, Ghost Rider, X-23 and Red Hulk are trying to stop from spreading to the entire world.

Venom has always been an interesting character to try and realize. I honestly don’t believe he was ever meant to be anything more than a villain, but his immense popularity has continually forced Marvel to give him his own books.  I was never interested in reading those Venom comics because I don’t like villain books. So imagine my delight when I discovered that not only was Venom no longer a bad guy, but that the book was in fact written by Rick Remender.  This gave me the impotence I needed to pick up the book and after reading 13 and 13.1 I’m very glad I did.

Venom: Circle of Four is loud, brash, over the top and most importantly a hell of a lot of fun. It’s a book that takes all the things that happened in the 1990’s with comics, sifts out all the crap and leave this wonderful filtered mix of burning skulls, bulging muscles and character pathos. These are big time characters with big time personalities, and that comes through in both the writing and the art. For example:  If you like the idea of a story beat that features a motorcycle rider with a flaming skull fighting a homicidal angel then this is the book for you.

I had my doubts about this, and the Venom series in general, but now I’m a true believer. This isn’t going to make you look at the frailty of your humanity, but it isn’t meant to. Venom: Circle of Four exists to give you bad ass characters doing bad ass stuff and in that it succeeds fully. You should head out to your local comic shop and get caught up right now.