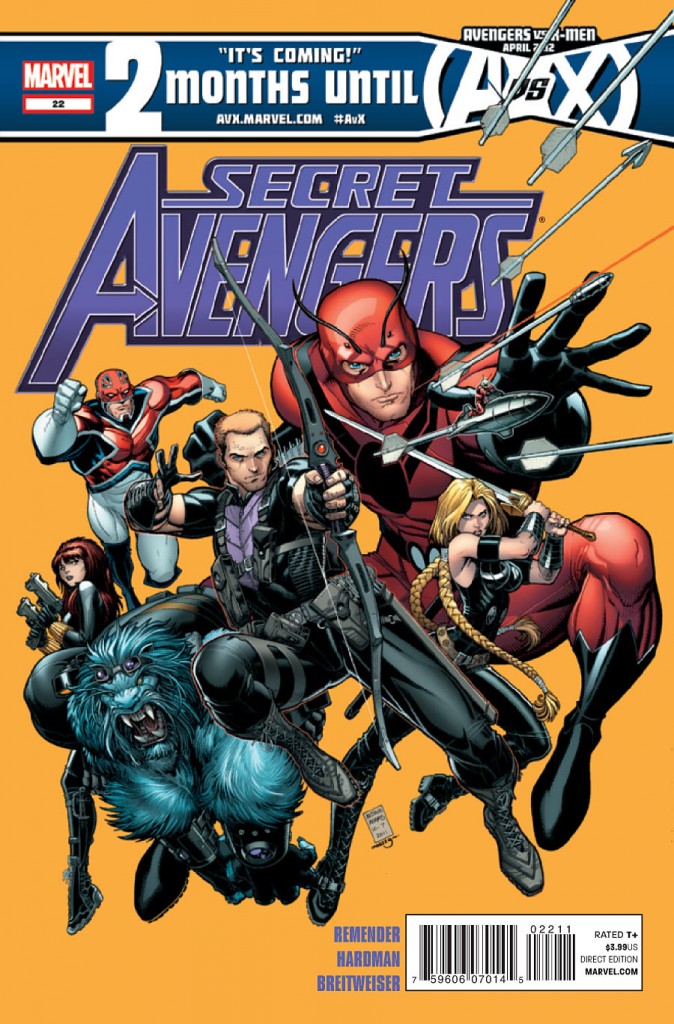 Coming off of Warren Ellis’ excellent  run I honestly am at a loss on how to review Secret Avengers #22.  After my first read through I perceived the book as being overly bogged down in continuity and too wordy for its own good. Upon a second read I realized that the level of continuity was not abnormally high and that in fact the book was not even as prose heavy as Uncanny X-Force, one of writer Rick Remender’s other comics.

So, with a scowl on my face I deleted what I had written and resumed my staring contest with the blinking cursor on my Mac Book Pro. After some time, and more than a few junk food indulgences, I decided I’d just have to write what I feel and what I feel is that Secret Avengers #22  is a disappointment.

If you read Secret Avengers 21.1 the set up for the issue should be clear enough. Captain America has got a lot on his plate, so he decides to hand over the reigns to the clandestine chapter of  Earth’s Mightiest Heroes to brash sharpshooter Hawkeye. In addition Steve Rogers has also enlisted the help of Captain Britain to help out Mr. Barton and bolster the team. Their first mission is to hunt down a woman with extraordinary powers who has been kidnapped by terrorists.

Rick Remender is a great writer but here I feel like he is getting in his own way. In starting up a new run he should be doing all he can to welcome new readers and the easiest way to do that is by clearly defining your characters. Instead Remender paints in broad strokes, letting us know that Hawkeye is brash, Captain Britain is a fish out of water and Beast is amusingly theatrical. Even as archetypes each of these characters has their great moments, but they seem ancillary to what’s happening in the plot. With the one real character thread being the power struggle between Hawkeye and Britain, but even that feels like a something I’ve seen hundreds of times before.

The book only really takes off when Remender takes a breather from being self serious and lets a few quips and kicks fly. The interplay between Hawkeye and Natasha crackles just as it should. But all the best moments are given to Beast which makes me very excited to see what Remender will do with the character. I’m also intrigued by the larger story that begins to break open at the end of the issue which I hope means we can leave the rather uninspired villains of this story behind. I don’t know about you but I think we can do better than “I’m your exact opposite and you can’t beat me,” can’t we?

In fact that’s how I feel about all of Secret Avengers #22…We can do better.

Wait and See- This is an odd mix of promising storytelling and bad delivery. Its blend of quippy dialogue and self seriousness don’t flow together well, but I found hope in the story when things lightened up a bit. The art was also a mixed bag for me. I felt it worked nicely in dialogue scenes but that once the action got going it became muddled and hard to follow. Rick Remender is a great writer so I hold out hope, but I wasn’t sold on this one.