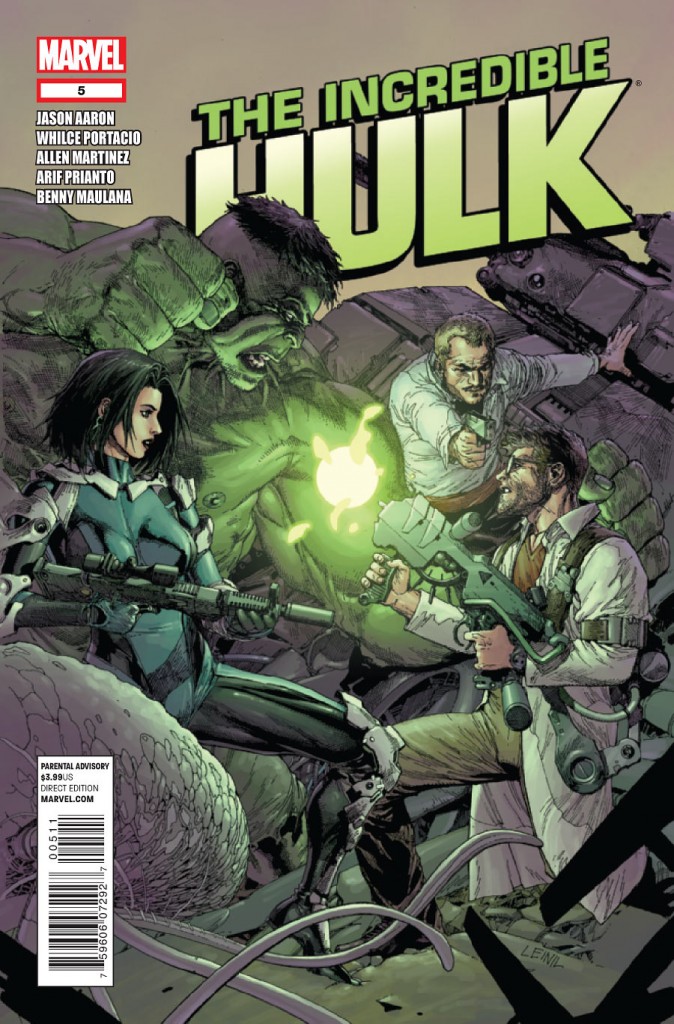 This is it… the big reveal. Since the beginning of this series, and the revelation that Hulk and Banner were no longer sharing the same body and mind, readers only wanted to know one thing: “Who separated the two?” Rest assured my friends, the answer is finally here and it’s probably not who you expected. Most of the issue is presented in alternating events of past and present. While Hulk and Amanda von Doom (no relation) fight furiously against Banner’s island of mutated animals, flashbacks tell the story of Hulk seeking out someone to help split him from Banner.

The mystery behind who split Hulk and Banner has been solved, but apart from that, The Incredible Hulk #5 just isn’t very good. Supporting character development has been almost non-existent and this issue does little to change that. The focus is on Banner’s decent into madness and on Hulk’s raging desire to be rid of him once and for all. The writing is, unfortunately, not up to the standard we have come to expect from Jason Aaron. At one point Hulk’s enemies are ready to fight him to the death and after only a couple of sentences Hulk has turned them into his allies. This is a bit far-fetched for a character who is supposed to have the mental capacity of a 7th grader. His diplomacy skills were not what I expect to see on display. Things only get worse when a monkey flings irradiated poo at Hulk. Yes… that happens.

I believe that Jason Aaron, despite all of his talent and previous accolades, is treading on some serious thin ice here. The idea of a Banner/Hulk split is fascinating, but dangerous. If not handled with care there could be serious harm done to the character of Bruce Banner. What we see here is so far from what Banner has been in the past that he is almost unrecognizable. It’s hard to believe, really, and story progression is moving at a snail’s pace. The art by Portacio hasn’t done this comic any favors either. With the exception of the incredible bearded Hulk look, the use of dull tones on an island full of hulk-like animals has led to a blending effect. The Hulk should command a page and be set apart. Alas, sometimes you have to squint to see where he is. Portacio does do a great job drawing scowls and evil grins, though. Banner believably looks like a man who has lost touch with reality and his actions back that up.

Marvel’s books do a good job of catching you up on the story before you start reading. You can jump into this book without having read any of the past issues and hardly miss a beat. The “big reveal” in this issue gives the story potential in regards to moving forward, but so far there hasn’t been much to get excited about other than the portrayal of Banner as a mad scientist.

Must buy if you’re reading the series because of the big reveal, but I can’t recommend it as a stand-alone issue. If the story doesn’t pick up soon, I’ll have to seriously reconsider following it. I have high hopes and believe that Jason Aaron can make this work – now he just needs to go out and do it.