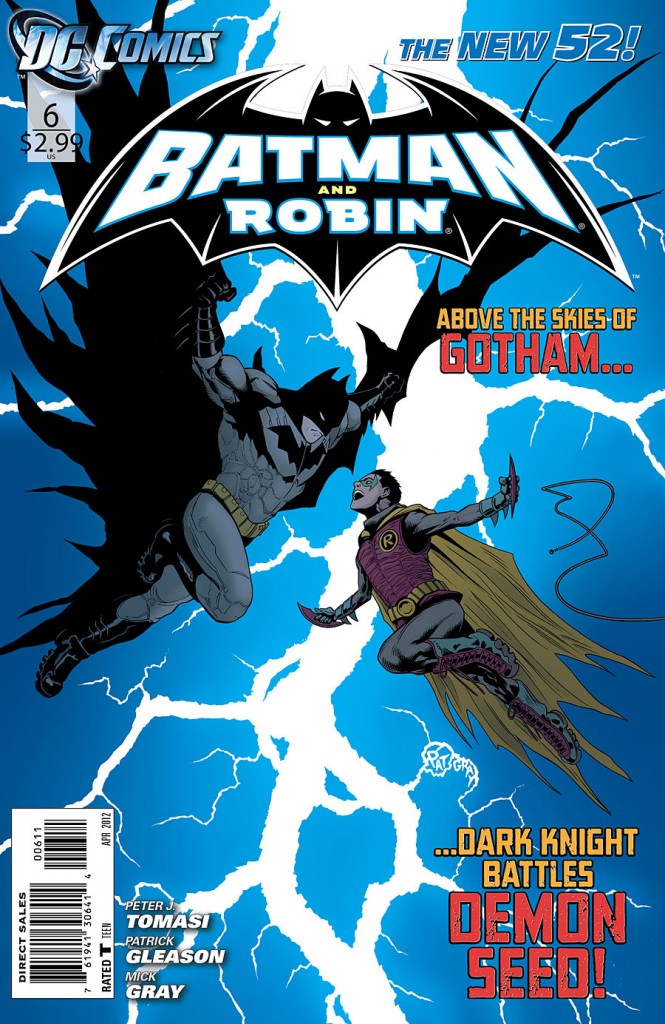 With baseball season just around the corner, that’s the first word that comes to mind upon finishing my second reading of Batman and Robin #6. And not just any homerun, but an out of the park blast that silences the crowd for a few seconds.

With Damian having left Bruce’s mansion to throw his lot in with Nobody, Batman is now on the hunt. It didn’t take long for this dysfunctional father/son relationship to break completely and end up hurtling toward tragedy. As Nobody continues testing Damian’s allegiance to his cause, Batman searches, and simultaneously records for his son the story of how he met Henri and Morgan Ducard (Nobody).

Peter J. Tomasi‘s storytelling here has reached a very high level. We see Bruce Wayne breaking down internally, fearing that he has lost his son forever to a very dangerous enemy. We also see him battling with his own mistakes in fatherhood and wishing that he’d made different choices. His search becomes frantic and the pace of this issue has quickened significantly from others in the series. Damian must make a choice and the ramifications of that decision will be enormous. The art by Patrick Gleason and Mick Gray is fantastic. This looks and feels like a superhero book and has some of the best wordless panels of art that I’ve seen so far in the DC New 52. The highlight of this issue’s writing is an emotional moment where Damian says, “Because he’s my father, you idiot,” and the amazing final page of the issue cements its greatness.

I have to admit that I’ve been skeptical about Batman and Robin from the beginning. I took great issue with the intelligent way in which 10-year old Damian speaks, as well as his unbelievable physical skill. The fact that he is a brat has never bothered me much because it’s a characteristic of his personality, but with this issue I’m noticing less of how unrealistic Damian’s maturity is and enjoying him more as a character. I also find Nobody to be a fantastic addition to the Batman gallery of rogues. Like most of Batman’s best villains, he is human, without superpowers and has a political/sociological agenda to his crime. The fact that he has such history with Bruce, and knows almost everything there is about the man behind the mask, creates many storytelling options and a very dangerous foe for Batman.

If you aren’t already reading Batman and Robin, jump on now. This issue gives enough information that you won’t be missing much and can enjoy the story going forward. It’s both written and drawn wonderfully and comes a close second to only Scott Snyder‘s Batman book.

Absolute must buy. This is the best issue of the series, includes some very emotional moments and historical revelations, and leaves readers counting the days for issue #7. If I had to name a “Book of the Week,” this would be it.