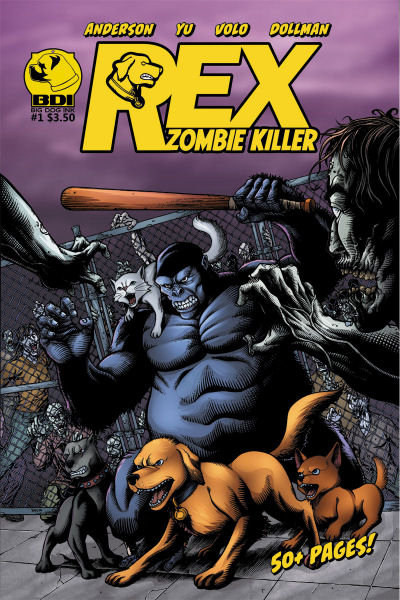 Remember that heartwarming Disney film Homeward Bound? It’s the one where the American Bulldog (Chance), the Golden Retriever(Shadow), and the Himalayan cat (Sassy) all take off on a wayward journey through the wilderness hoping to find their way home. You remember it? Okay good. Because this comic has that vibe … now add big ass gorilla with a baseball bat, and … zombies!

So the world has gone all to hell. That apocalypse people are always warning us about has come and left all that you know in ruin. There are gangs in the streets, zombies in the fields, and five unlikely friends are just trying to make it to safety. A Golden Retriever (Rex), a tough, but battered Pitbull (Brutus), a lighthearted Corgi (Buttercup), and a 2 ton Gorilla named Kenji are off on a mission through the zombie ridden plains in search of their scientist friend and unfortunately for them, they are going to run into all sorts of trouble. The book has this unique art style to it that reminds me of Japanese woodcarvings (lots of thick black curving lines serve as the shadows), and to a certain degree, tattoo artistry. The story moves well enough as our characters meet with several moments of danger and in some cases, death, and at 50+ pages you’ll be given not only your introduction to the story, but a little bit more as well.

My regret with Rex, Zombie Killer is that I’m not entirely certain who it’s supposed to be for. The dialogue and action feel a little too tame for being a post-apocalyptic adventure, yet the book feels a little too mature for younger readers (i.e. animal death). The book feels as if it’s skirting that invisible line between wanting to be for fans of zombie fiction or straight up animal lovers. I’m a fan immense fan of both so I’d really like to see a decision made on that end in future issues. I think there is potential here to tell a good story with a colorful cast of characters, but the book needs to first decide who it’s audience really is and stick to it.

The formula for good storytelling is there and perhaps with a bit of time Rex can develop into something wholly enjoyable. The art is fun and the book picks up in pace in the second chapter, then leaves you with a rather ominous ending as our band of animals takes off on another dangerous road home.