Chronicle is, in many ways, an anomaly in today’s event movie landscape. It’s a film not based on a comic book, novel or toy line, it doesn’t carry a 100 million dollar budget and you won’t find “Chronicle 3-D” on any movie theater marquee. What you will find is an original, character driven action film that delivers the most satisfying superhero origin story I’ve seen since Batman Begins.

Chronicle is the story of three high school boys who stumble upon a strange artifact buried in the earth that grants them extraordinary powers. That’s all I will say about the plot because part of the great joy of the film is the surprises it serves up.

Writer Max Landis has crafted an air tight script that pulls off a minor miracle, in that it manages to have a third act that actually improves on it’s first. Too many action films rush to their big moments only stopping to waste time on forced, poorly developed, romantic subplots. Chronicle allows its plot to simmer, letting its characters and narrative develop and grow organically. This film is mostly about its three protagonists learning to live with their powers and these small moments are just as engaging as any of the big moments that close out the film. 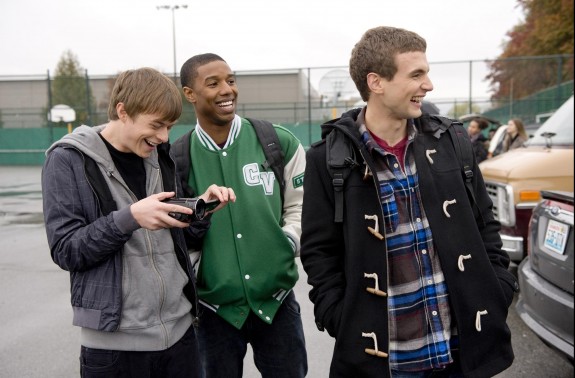 Those little moments are made so fascinating by the strength of the three young actors playing our leads. Dane Dehaan, Alex Russell and Michael B. Jordan all feel like real teenagers to me.  This allows their interactions to have a refreshingly natural cadence to them. Most importantly all three have agency over their actions in the film. It’s refreshing to see characters who are constantly doing instead of having things done to them.

DeHaan plays Andrew Detmer, our chronicler who has a had quite a rough life. With his abusive father, dying mother and low social status he may sound like a walking movie cliche, but DeHaan never let’s his performance veer into stereotype.

Michael B. Jordan also dances around a stereotype as class president/jock Steve Montgomery. It’s no surprise to anyone who’s seen Friday Night Lights or The Wire that Jordan is capable of great things as an actor and here he gets the chance to put his most charming foot forward. I’ts nice to see a film character who is popular because he’s awesome and not because he’s a cruel douche.

I’m also very impressed with director Josh Trank. This is only his first feature and already he seems to have an innate sense of how to construct and pace an action film. I also like that he employs traditional shot composition to a movie supposedly filmed by regular people. This may not work in a story sense but it makes the movie infinitely more enjoyable to watch.

It’s impossible to talk about Chronicle without mentioning the style in which it’s shot. I have grown weary of the found footage movie in the last few years. I find most of them to be poorly acted, horrendously shot and their choice of style rarely feels crucial to the story being told. Chronicle is a good looking film, with superb acting but it still seems to me that the decision to make it this way is strictly budgetary. Trank and Landis have come up with several clever ways to bring new life to the concept – including one genius story reason for the camera being able to film all three main characters – but I still feel like there is no compelling story reason for the movie to be shot the way it is. That being said, I don’t think the style of film hurts its quality but I don’t think it adds anything either.

I left my viewing of Chronicle excited to write about it. It’s a well acted, kick ass ride, that earns it’s big action beats and makes the best of it’s found footage concept.  The movie also manages to capture the spirit of comic book narratives in a way that many of the big budget films never do. This is a must see.