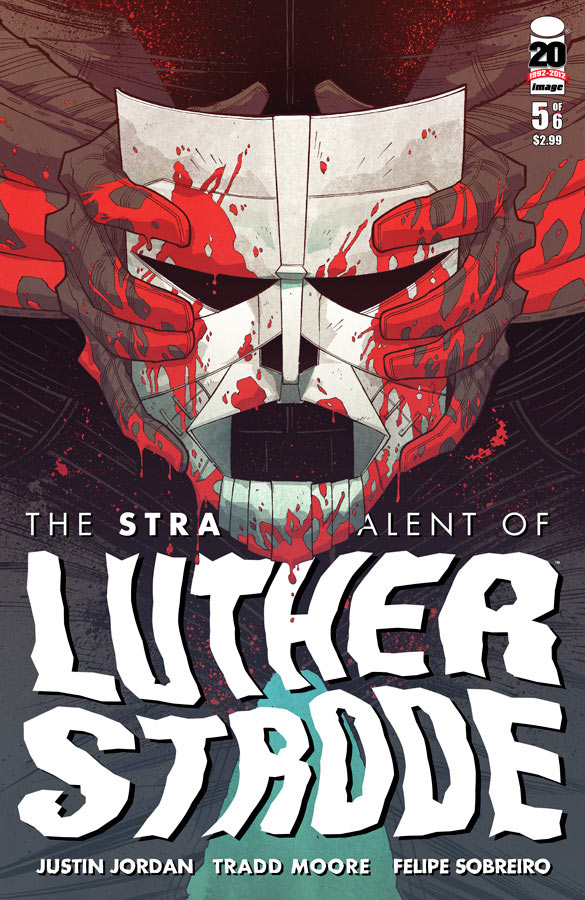 The worst part about The Strange Talent of Luther Strode #5 is that we’re going to have to say goodbye to this great series after just one more issue. Thankfully, things seem to be shaping up quite nicely, and I have full confidence that when things come to close we’ll walk away from it feeling very fulfilled.

This issue we continue the moments in which Luther is racing against the clock in the hopes of rescuing his loved ones. After discovering that his new girlfriend, Petra, has been taken hostage, Luther, dashes to her rescue, leaving a trail of bloodied bodies in his wake. Perhaps the best part about  The Strange Talent of Luther Strode #5, is that it’s fully aware that we’ve laid all of the groundwork for the storytelling and that it’s, once again, time to beat some ass. The pace of the story at this point is that of a frantic nature. Luther’s confusion, strife, and desperation are felt and given more meaning by his actions within these situations harboring such dire circumstances.

I really like the fact that I care about these characters. Well, I can take or leave Petra, but Luther’s mother and best friend, Pete, I really do care about what happens to them. It’s a credit to Justin Jordan and his ability to craft likable, endearing characters that after only a few short issues, they actually matter greatly to the reader. There are plenty of short lived books that are released every year that have only 5-6 issues in which to fully realize their story, and I already know that Luther Strode is going to be one of those ones that stick with me for the rest of the year and beyond.

If you’re not reading The Strange Talent of Luther Strode, you really should be. With only one issue left to go this is sure to be a stellar trade pickup when the time comes but I’m sure your local comic shop will be able to get their paws on the single issue before they are all gone. I urge you greatly to check this out.