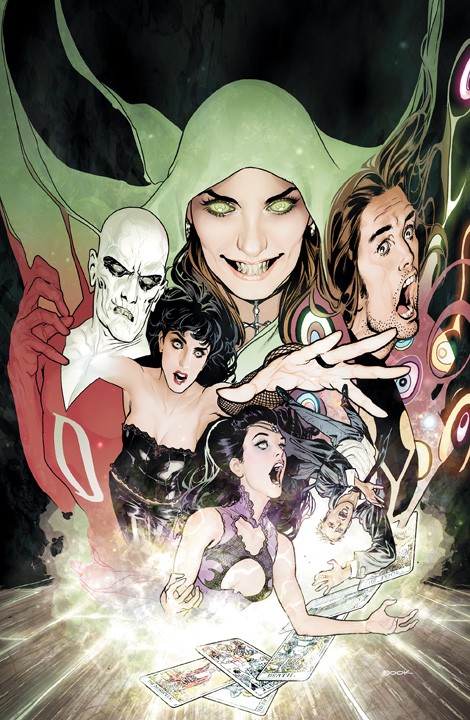 If you’ve been following the Talking Comics podcast, you’ll know that one of the people we all greatly admire is Sweet Tooth creator Jeff Lemire.  Lemire has been a very busy man as of late and in addition to working on Sweet Tooth, he’s also been busy working on Animal Man.

Just when you thought that he couldn’t get any more awesome, today DC Comics announced that Lemire will be taking over JUSTICE LEAGUE DARK very shortly.

“This is my dream gig at DC Comics, no doubt about it. The characters in Justice League Dark are my absolute favorite in the DC Comics stable, and I can’t believe I’m actually getting a chance to write John Constantine, Zatanna and Deadman (as well as a few new team members!).” ((read the rest of what Lemire has to say about this exciting news at the end of the article))

I think that this is pretty incredible news.  A big name writer like Scott Snyder has done wonders for the DC New 52 Batman run and I’m really interested to see where Lemire will take the story for JUSTICE LEAGUE DARK.  There’s a great set of characters involved and it’ll be fantastic to see how artist Mikal Janin and him will work together on this new project.

More on what Lemire had to say about JUSTICE LEAGUE DARK:

“I have a huge amount of respect for Peter Milligan. I’ve loved everything he’s done since his original SHADE run in the pre-Vertigo days of DC to his current run on Hellblazer and JL Dark. It’s a bit daunting to take over this title from someone who I revere as much as Peter, but at the same time I can’t help but be inspired by the work he’s already done with this book.

I obviously have my own ideas for the title as well, and can’t wait to share them with readers. One of the things I’m anxious to explore is just why the name “Justice League” is in the title of this book? I want to explore and create new connections between this team of mystical misfits and Geoff and Jim’s big guns in The Justice League. On that note, Geoff and I have had many discussions on how to link our two books and make the Justice League franchises connect in new and unexpected ways. More on that in the near future…

So, what else can you expect from the “New” Justice League Dark? Well, you’ll see an old haunt becoming the team’s new HQ. Constantine, the master manipulator that he is, will emerge as the clear leader of the team, and there will be 2 new members as well! (Hint one’s a man and one’s a woman. One uses magic, one doesn’t.) Not enough….hmmm…how about a classic Justice League villain re-imagined as The Justice League Dark’s new arc-enemy? And that’s just the start. I have a huge storyline planned with implications across the Dark line of books.

I would also be remiss if I didn’t mention that the amazingly talented Mikal Janin will be staying on board to draw all of this fun stuff, and I couldn’t be happier about that. I’ve loved Mikal’s work since I first saw it in the Flashpoint: Deadman mini-series and I think Mikal is the perfect artist for this book. And I can already tell by our initial talks that this will be the start of a great partnership. And we’re both lucky to have the incomparable Ryan Sook making us look good.”

I’m pretty damn excited to be writing Justice League Dark. And I hope you’ll join me as I take you and these characters into the darkest, strangest corners of the DCU and beyond!”