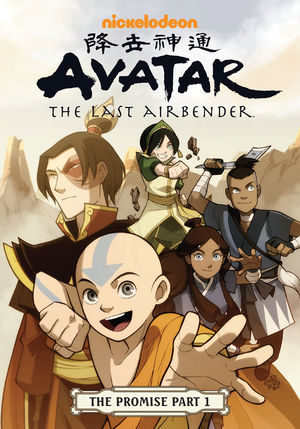 Review: Avatar The Last Airbender: The Promise Part One

Art and Cover by Gurihiru

It’s been far too long since we’ve taken to the skies while sitting atop a giant flying Bison with Aang, Kitara, Sokka, Zuko, and Toph. After a three spectacular seasons and perfect final episode The Last Airbender will always have a special place in my animation appreciating heart. Now we find ourselves, years later, gazing upon the first direct follow up to the events set forth by this highly acclaimed animated series. Does it live up to the hype? Has it been too long since we last entered the Avatar state? Is Avatar still a cool and profitable property for children … and people like me?

Yes! A year has gone by and our characters have been quite busy in the interim. Zuko is now Lord of the Fire Nation and learning to cope with his new station life,  Aang and Kitara are settling further into their blossoming relationship, Toph is a master trainer of Earth bending, and Sokka is still … well, hilarious. After some time has passed, Zuko, begins to doubt his ability to unite the Elemental Nations, and after backing out of a treaty set to be the backbone of a new world order, it’s up to Aang and the gang to set him straight. This 76-page graphic novel is as true to the source material as it gets. Yes, all of the original creators, artists and talented writers are back but it’s still nice to know that they haven’t lost touch with the heart and soul of this franchise. The book is filled with colorful art, element bending action, and endearing character interactions that remind you of why you loved the Nickelodeon animation so much.

I think perhaps what I like the most about furthering the relationships and adventures of these characters is seeing Aang and Kitara together as a couple. It’s so rare that we actually have functioning animated characters that cater to such a young audience. Most animated relationships are reserved for film or adult themed weekly shows on major networks, though, in the case of Aang and Kitara, we get something simple and pure. Their relationship now lends to some very tender moments and an ocean of “oogie” jokes for Sokka to dish out.

With the charm, hilarity, and solid story telling of the series all intact, this is a must buy for anyone looking forward to the new animated series The Legend of Korra (working title) coming to Nickelodeon later this year.

With undoubtedly another stellar cartoon series on the way you’re definitely going to want to share in the events in between both stories.