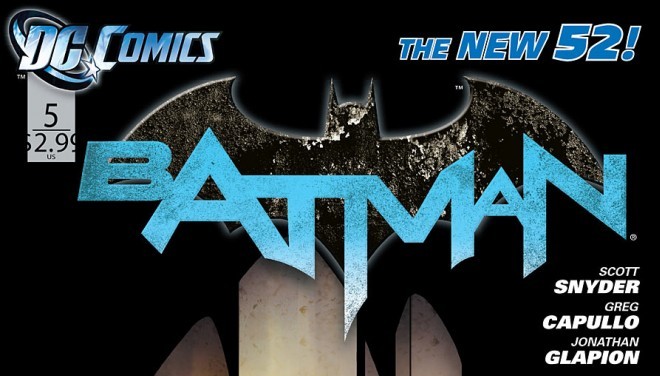 It’s been a few days since I first read Scott Snyder’s Batman #5 and it has taken that period of time for me come up with an appropriate way to write this review. Reactionary writing is something I try to avoid because nothing is usually as great or as horrible as you think it is in the moments after reading it. So, after reading Batman #5 and going completely crazy for it I felt I needed the appropriate time and perspective to really review it. After five days and two re-reads I can say unequivocally that Snyder and artist Greg Capullo have crafted a challenging, scary and enthralling Batman tale that, in my mind, cements it as the best major superhero book being published right now.

Before I get into Scott Snyder’s wonderful story or Greg Capullo’s brilliant art and page design let me say that if you aren’t reading the New 52 Batman for whatever reason start doing so now. If you are an old DC fan who didn’t like the reboot and so abandoned the books you are missing a truly great creative team handling the most interesting hero there is. I don’t care what corporate logos and branding adorn the book, if you are a fan of storytelling you need to be picking this up, monthly. All right now that’s out of the way let’s get to it!

I always start with the writer, but this go around it would be down right irresponsible of me not to lead off with what Greg Capullo did with the visuals this issue.  Whether it’s the traditional, yet emotionally complex, layout of the first and last pages or the labyrinth like layout that fills most the issue the book is  a showcase in the staggering range of Mr. Capullo’s abilities. There have been many instances where Bruce Wayne has been driven to the edge but never have I perceived him as being so helpless. Capullo communicates this by slowly deforming and changing of Batman’s physical appearance. The center of which is a deranged look in his eye that shows his ever quickening descent into madness. No matter how deep his psychosis, though, he’s still a character and we are used to seeing fictional individuals put through trial and tribulations on the mind. What we are not accustomed to is having our own mental stability and sense of direction upset while reading a work of literature. Capullo has pulled this off by completely changing the physical structure of his comic book. Pages are printed upside down, two page spreads call for you to turn the book in an obtuse manner and this creates a mental state in the reader very similar to that of our hero. What better way to tell a story of Batman lost in a maze then to make the issue a maze itself? If you aren’t absolutely focused on which direction you are holding the book you could end up right back at the beginning of the story.  It’s a move I never would have expected or thought of but it’s execution is perfect.

Then there is Scott Snyder whose writing in Batman #5 hits all the high water marks I set when reading any story. Its tone is spot on and consistent, the plot is fully realized and earns all its big moments and it manages to bring emotional investment in even its minor characters. Greg Capullo’s artistic way of showing Bruce’s fragile psyche is stunning but Snyder’s words are a flawless companion to this visual flair. Mr. Snyder uses word and phrase repetition to intensify the tale of  a man who is used to having things a certain way being thrown out of his element. Batman is the legend, the one who scares people and who confuses them, but here his tactics are being turned against him. He’s facing his demons and his demons are winning.  All of this is framed by what is happening outside of the maze. This is a world that has now been without Batman for a week and things are getting desperate. The great thing is that despite only getting a few brief moments there is real emotional pathos in these pages.  There is one panel in particular, where a desperate Robin pleads to have a symbol of his father fixed, that hit home for me in a way I would have never expected.

I shouldn’t be surprised that Batman #5  is as fantastic as it is. The first four issues have been master classes in monthly comic book storytelling but I feel like this time around I’ve moved up to the PhD level. It has challenging, scary and beautiful art from Greg Capullo which works in perfect compliment to Scott Snyder’s stellar writing.  I truly feel this is a story I will be talking about in five, ten or even twenty years as one of the most interesting things I’ve seen done in comic books.

Buy It – You can’t do much better in super hero storytelling. It will entertain, challenge and maybe even scare you a little. If you aren’t caught up with this arc get to it because it’s something that shouldn’t be missed.