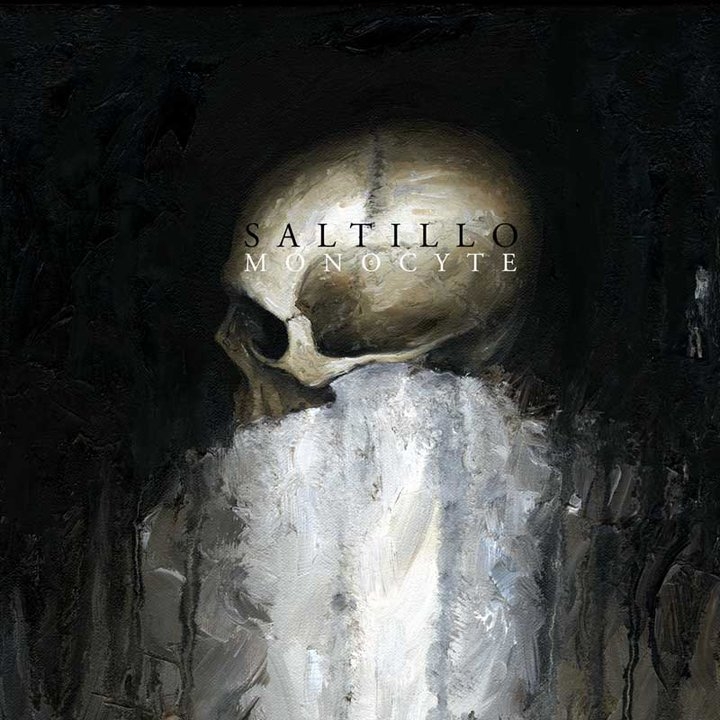 Monocyte is an comic epic set within a world born out of shadow and the hubris of mankind. As you walk the ravaged plains of Menton3‘s world, you can taste blood on your tongue as you breath the poisoned atmosphere. Through stark and unforgettable visuals Monocyte  challenges it’s readers with complicated themes and verbose languages that narrate a most sorted tale of black intent. So … what can you do to possibly give a world like this an even deeper sense reality? Well, if you’re Saltillo (Menton3’s very own musical project), you build an album around the themes of this otherworldly environment, that’s what!

I have to admit, that when our Editor-In-Cheif, Bobby Shortle, told me that he wanted me to review a “concept album” for a comic book, I was almost instantaneously depressed. Immediately, I had visions of my ears being assaulted by the abysmal antics of bands like Paramore, Evanescence, Linkin Park, Flyleaf, or whatever garbage passes as popular “art metal” (give me a break) in this day and age. You can imagine my sense of euphoria and relief when he informed me that the album came from our IDW connection and that it was, in fact, for a comic that I am very much into, Monocyte.

Okay, so Menton3 has his own band? Why didn’t anyone tell me this sooner? Slackers. Yeah, this album is pretty intense. There’s nothing like listening to music and finding yourself identifying with the melodies all while subconsciously swaying to the sounds. Saltillo‘s album, Monocyte, takes the foundations that have been laid by the comic and breaths new life into the experience through atmospheric tones and cascading violin jams. It’s a little bit Trent Reznor with Atticus Finch, a little Puscifer, some Lustmord, a whole lot of DJ Shadow. Though, I only make these comparisons so that I may paint you somewhat of an auditory picture, but, I assure you, that these influences are merely complimented and never ripped off in any way.

Saltillo gets my respect for not only mirroring the world of Monocyte with this complimentary album, but, for also proving that such a project can exist at all without coming off as cheap. Not to say that there hasn’t been an innumerable amount of solid tracks from comic book film adaption soundtracks (both The Crow and The Crow: City of Angels soundtracks still rock particularly hard to this very day), not all of them come close to achieving the nuance brought by Monocyte. Packed with break beats, lilt guitar, echoing chants, unholy sermons, and drastic electronic drums patterns, the album certainly makes you feel as if you’re walking the desolate valleys of the dead. There are even moments when you can feel the wrath of The One Eyed as he rips the bones from his oppressors, using them as blades to cut a swath in the direction of victory.

In my opinion, while the album works well as a whole body of work, the stand out tracks are If Wishes Were Catholics, Veil, and To Kill a King. It’s within these tracks that the band is join by a female vocalist, Sarah Matthews,  who adds a much welcomed elegance to the rayless trip-hop vibe. While angelic,  her voice  comes onto the tracks like an elegant ghost soaring above a river of damned souls, her voice carries the music to another plain; above the sermons, beyond the sinister strings. Truth be told I’m actually listening to the album for my fourth time in a row as I type this review. It’s one of those albums that with each listen becomes better each time. It’s these types of innovations in the comic industry that demand your attention.

If you’re new to the world on Monocyte  then I strongly recommend that you check out our the comics, and then read our reviews of issues #1 and #2 published by IDW Comics.

For more information about Saltillo please visit their Facebook page: