Archaia was good enough to send over the cover for  Cow Boy: A Boy and His Horse.  The hard cover graphic novel will be released in March of this year. Are you interested in this title? The cover and press release are below. 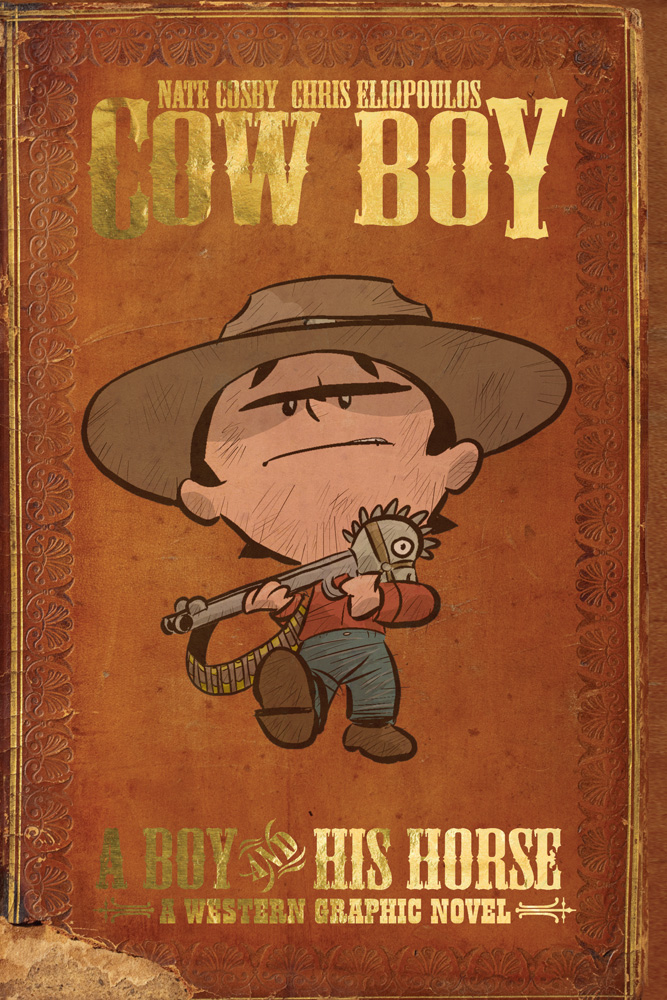 [box type=”shadow”]JUSTICE AIN’T GOT NO AGE: ARCHAIA PROCLAIMS ‘COW BOY’ IS ON THE HORIZON

COW BOY’s the tale of Boyd Linney, a 10-year-old bounty hunter determined t’round up his entire outlaw family. He scours the Old West on a horse that ain’t his, armed with a stick-horse what packs a loud holler.

“This is my favorite thing I’ve ever written,” said varmint author Nate Cosby. “And it’s the best thing Chris has ever drawn. It’s an all-ages tale of justice, redemption and growing up with the knowledge that you can love your family…but that doesn’t mean you can let them get away with everything. I’m so excited Archaia is giving Chris and I the chance to bring our story to a big audience.”

“Creating a book that can be read by anyone and everyone gives me a great feeling,” spouted yella-bellied Chris Eliopoulos. “Knowing I can hand COW BOY to my parents or my children and know they will both enjoy it is something very rare these days in comics. And for me personally, I enjoyed the chance to push my art in new ways. From the coloring, the action to evoking a feeling with a few simple lines, this has been one of the best things I’ve ever done and I know that when people read it, they’ll love it, too.”

Archaia’s ne-er-do-well Editor-in-Chief Stephen Christy done said, “I ain’t had this much fun reading a kids comic since Calvin and Hobbes, an’ that’s the truth. Readers should buy this book now before Nate an’ Chris get locked up for that trouble they caused over the border last year.”

“There are a lot of things to love about Cow Boy. [It] is a book full of heart and soul.” – Ali Colluccio, iFanboy

“Cow Boy takes me to a happy place. I see it having that effect on about everyone who reads it.” – Amy Ratcliffe, Geek with Curves

“…an engaging comic truly for all ages.” – Aaron Long, Comicosity

This here book’s shippin’ in March, and is available for pre-order now through them comic shops.

Startin’ January 23, you can mosey over to http://cowboycomic.net and follow the adventures of the Cow Boy. There’ll be free weekly updates with never-before-seen parts of this tale for all ages to gander at.

Archaia is a multi-award-winning graphic novel publisher with more than 50 renowned publishing brands, including such domestic and international hits as Mouse Guard, Return of the Dapper Men, Gunnerkrigg Court, Awakening, The Killer, Days Missing, Tumor, Syndrome, Artesia, The Engineer, and an entire line of The Jim Henson Company graphic novels. Archaia has built an unparalleled reputation for producing meaningful content that perpetually transforms minds, building one of the industry’s most visually stunning and eclectic slates of graphic novels. Archaia was named Graphic Novel Publisher of the Year according to Ain’t it Cool News, Graphic Policy and Comic Related, and was honored with nine 2011 Eisner Awards nominations. Archaia has also successfully emerged as a prolific storyteller in all facets of the entertainment industry, extending their popular brands into film, television, gaming, and branded digital media.[/box]