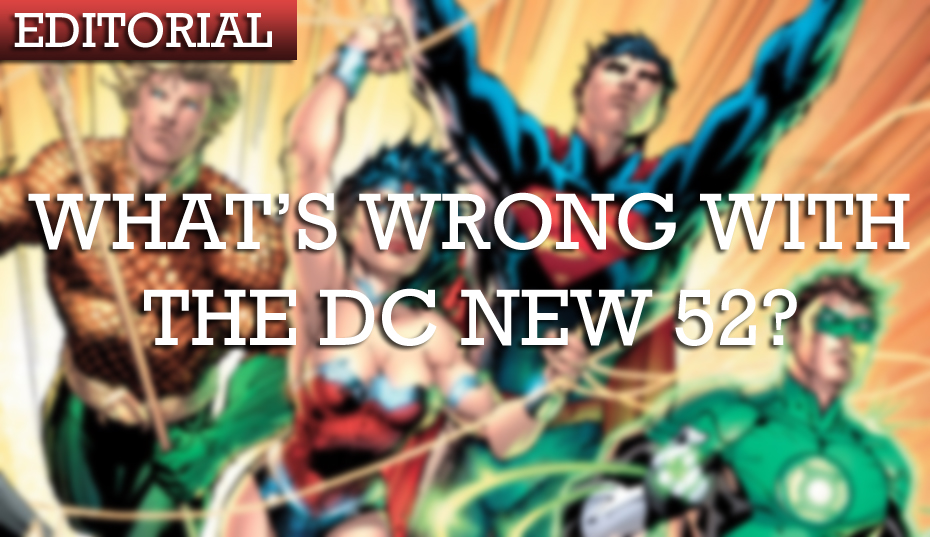 Trying to stay current with the tastes of a general audience is sometimes an exercise in futility.  It seems the moment something is universally praised as a “sure bet” is the same moment where it begins it’s descent into irrelevance. It’s an even more difficult task to take a medium largely ignored by the main stream and try to thrust it back into the spotlight.  The comic book industry has been looking for a way to energize the new fans it has accrued from it’s film adaptations into a new reader base which has been an uphill battle because the perception of comic books is that there is too much continuity to sift through to simply go pick up a new book on Wednesday. So it was only a matter of time before one of the big boys figured out a way to make the comic universe more friendly to the willing beginner. DC Comics, so often out flagged by Marvel on any innovative undertakings, made the bold decision to reboot their universe back to zero; At least it seemed bold at the time.

The release of Justice League #1 was marked by two things. One were tremendous sales numbers that seemed to instantly validate DC’s decision but along with that came a bevy of complaints from long time readers. There was a lot of outrage from these consumers but lost in all the fanboy belly aching about characters they love being cut or on going story lines being scuttled is the real issue with the New 52. Which is the inarguable truth? That the seemingly extreme move by DC Comics was not extreme enough? The event should have heralded a new day for the industry but instead has quickly shown itself to be a wishy washy endeavor that seems to all ready be ret-conning itself.  The DC New 52 also, despite individual artistic achievements, seems to have no direction.

I have no problem with the inception of the New 52 but it’s execution has been deeply flawed. We are still early in the life of this reboot and maybe I’m jumping the gun.  However, as most of the initial story arcs are coming to a close I wanted to go over just three of the missteps I believe DC has had in their universe reinvention.

The first book published in the DC 52 was Justice League #1, which is set 5 years before the events of the other books in the relaunch except for Grant Morrison’s Action Comics, which takes place an undisclosed amount of time before even Justice League.  But in JL The Flash and Green Lantern all ready have a history. So does that mean that there are more stories to be told in-between? Also there are parts of the old DCU that have not been deleted, just compressed. Barbara Gordon still got shot, Superman still got killed by Doomsday, and the War of the Green Lanterns still occurred, but has that stuff happened before Justice League #1? Will we see any of it again? We are all of five months in and I, who reviews these books monthly, am flummoxed at the intricacies in the chain of events. How is any of this casual reader friendly?

Everything is Rebooted…Wait Just Kidding

There are a few real genuine number one books in the DC New 52. Supergirl, Demon Knights, Animal Man, Batgirl, and Frankenstein Agent of Shade all manage to either reinvent or incorporate their characters origins in such a way that they feel fresh and new. Then there are the books that feel like they have ignored the reboot completely. There is not a more egregious offender of this than Green Lantern. What does it say when a book penned by Geoff Johns, the Chief Creative Officer of DC Entertainment and the person who is coincidentally responsible for the entire direction of the universe, is not on board with the company’s most important move in decades? It reeks of institutional hesitation to see it through to the end.  From the outside it seems like Johns is saying  “Let’s reboot everything except my book because I had a plan for it.” I have done a lot of theater in my day and a note that is often given by directors is to commit to the moment. This can mean many things, but to me it always meant stop worrying about what you look like or what others think, and give your all to what you are doing. In my opinion DC Comics needs to commit to the moment or get off the stage.

Earth-2 and Batman INC. coming back

The fact that Blackhawks, Hawk and Dove, Men of War, Mister Terrific, O.M.A.C. and Static Shock were the first cuts of the DC New 52 is not much of a surprise. Those books were always going to have a tough time gaining traction and so their expulsion is not disheartening. What is off putting are the books that DC has decided to put in their place. The return of Earth-2 and Batman Incorporated (because what DC needed was another Batman book) are clear peace offerings to the group of readers who were pissed off when those stories went away. But I ask you, how in the world is bringing back a gaggle of World War II era heroes simplifying the universe?  Nothing says impenetrable comic continuity like multiple universes existing in parallel dimensions but I guess the philosophy is that when in doubt go back to the thing you know. Even if that thing you know is largely responsible for the shift you made a few months ago.  Earth-2 might end up being a great book, and if so I will look forward to reading it, but what it signals about DC’s dedication to their new universe is troubling. How far are we away from them scrapping this time line and making it into a universe all it’s own; Earth-52 here we come.

Do you agree with my take here? Disagree? Have complaints of your own? Please leave comments below or get in touch with us @talkingcomics or @bobbyshortle on twitter or you can even email us info@talkingcomicbooks.com.