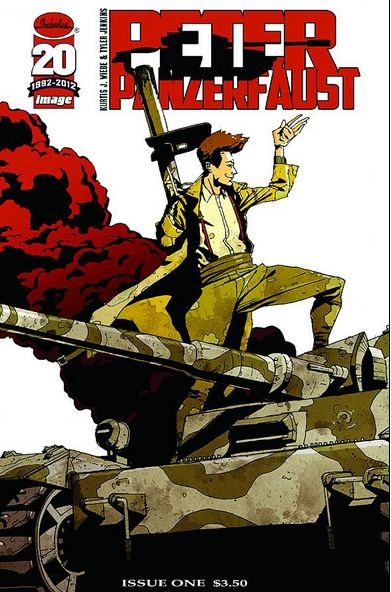 It’s only been a few weeks since I’ve been aware of Kurtis Wiebe and his kaleidoscopic sense of imagination. After shotgun reading eight issues of his acclaimed otherworldly series, Green Wake,  in one sitting, I was hooked. Recently: Stephanie, Bobby, and myself were even afforded the opportunity to chill out and speak with Kurtis on Issue #12 of our weekly podcast, where we talked extensively about his latest creation, Peter Panzerfaust.  Now that some time has passed, and the book is on it’s way to shelves on February 7th of this year, it seems like as good a time as any to give you my thoughts.

When I’d first gotten wind that Kurtis, would in the very near future, be penning a comic inspired by J.M. Barrie’s Peter Pan in the guise of a war epic not unlike the 80’s classic Red Dawn, I was baffled. Suddenly, we’re transported from the haunted purgatory of Green Wake, to the ruined streets of Russia, matching bullets with the Axis of Evil. Inside of a quiet room, an unidentified interviewer asks his questions while buried deep within a shadow, where the angle of the sun fears to shine. Inside of this scene, a man by the name of Gilbert recants his tale of how he and his band of brothers (representing The Lost Boys) came to meet a mysterious and magical soldier named Peter. What follows is a page turning war epic that’s just as peculiar as it is dangerous.

What I enjoyed the most about this book is, of course, all the clever nods to  J.M. Barrie’s Pan. Appreciating the subtly of it’s delivery, the book never beats you over the head with it’s source of inspiration. No, the winks and nods are there, but in a manner that works for the story and are so well implemented that fans will be reminded that within these war torn streets are moments of pure magic. In our talks with Kurtis Wiebe he has assured us that all manner of characters from the world of Pan will be in some way making an appearance. Everyone from Smee, to Wendy, Michael, and even Captain James Hook will be joining the fray further down the road as we explore each perspective of the various soldiers who’ve been fortunate to serve with the mysterious Peter.

Peter Panzerfaust is one of those comics that you just know is going to grow into something pretty fantastic. With bullets flying, lovers lost, soldiers broken, and plenty of displays of courage that only a man with the mind and fortitude of a child can bring, Peter Panzerfaust doesn’t need to be sprinkled with fairy dust to know that it will fly off the shelves.

VERDICT – Buy it. I’ve read our advanced copy of Peter Panzerfaust #1 several times and find that in the end I am more than ready for the next issue. February 7th simply cannot come fast enough for this fan of fantasy and fairy tales.