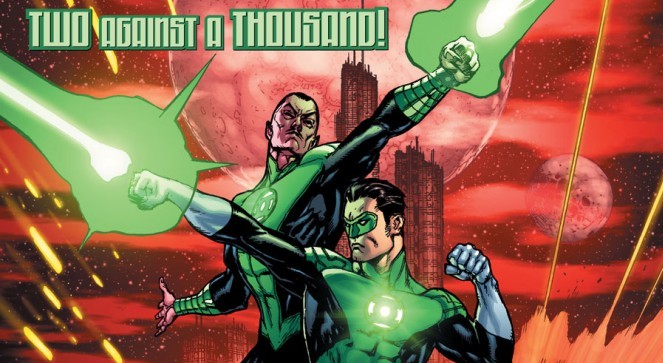 It’s with a heavy heart that I write this review of Green Lantern #5 a book that, despite its excellent creative heritage, is severely disappointing. Geoff Johns is a one of my favorite comic book writers but this entire New 52 run on the Emerald Knight has been middling at best. The largest factor contributing to this is the book’s befuddling decision to assume the reader has a wealth of prior knowledge about the series. This is supposed to be a semi fresh start but instead Johns relies on your attachment to characters and events that happened in a now defunct past. Sinestro’s redemptive quest to save his home world, Hal Jordan’s love of Carol Ferris, and the final twist all feel flat because they have not been properly set up in the past five issues.

The book’s underwhelming nature is made all the more infuriating because I can see the interesting narrative trying to poke its head out. Sinestro is an inherently layered character but that needs to be reestablished in order to pay off his character arc. The history of his disagreement with the Guardians and Hal Jordan are all played upon but again they are never set up. All of this firmly cements a feeling of dissatisfaction with a potentially fascinating character.

I will say that if you’ve been reading and enjoying this run there is an end to the story that, on a purely technical level, finishes it off well. There is also a battle scene that makes clever and violently graphic use of the yellow versus green aspect of the series. But as much as I love seeing a Sinestro Corp member being disintegrated by the light from a Lantern its not enough over come the lazy story telling of Green Lantern #5.

VERDICT
Skip it- It relies too much on the old and brings nothing exciting or new to the table. The action is suitably cool but its not enough to overcome an overall sub par book.