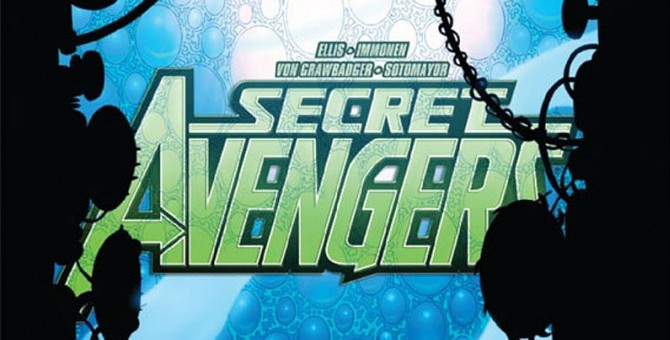 For those, like me, who were uninitiated into the ethos behind Warren Ellis’ run on Secret Avengers let me fill you in. There is a tendency, many times for the better, for comic books to build into huge multi issue, multi character and multi universe events. The reason is simple; The higher the stakes and spectacle of a story the bigger the payoff. But what if you could fit all that razzle dazzle into single one off issues?   That is exactly what Ellis has done with the  black ops version of Earth’s Mightiest Heroes.

Issue #21 takes our covert band of adventures into the headquarters of O.N.E. to stop an enemy agent – of the nefarious sounding Shadow Council  – from sabotaging some very important cargo. There is a major emphasis on the space in between the light in Secret Avengers and the tone it creates is enthralling. In fact, the only real problem I have with the book is the way it is presented to the outside world.

Upon opening Secret Avengers #21 there is no way of knowing that these books are mean’t to be taken one at a time. I think it’s a real shame that Marvel has not done a better job publicizing the one and done nature of this series because I think it’s perfect for the reader wanting to get into some of the bigger books. The character list – comprised of Steve Rogers, Moon Knight, Beast, War Machine and others – is well known enough to take some things for granted but obscure enough that there are still layers yet to be revealed. Most episodic books use characters to illuminate the plot but in a one off situation Ellis does not have that luxury. He instead flips the script using his ticking clock plot to show you the depth in his heroes. I’m especially a fan of Steve Rogers’s interrogation of Lt. Hood as it brings out some of the core vulnerabilities in the super soldier.

Secret Avengers #21 is a self contained narrative so if you don’t like your stories wrapped up in one issue you will be disappointed. However, I implore you not to be sidduaded because the fact is this title is a rock solid piece of entertainment with a cool story, striking use of color and some big action; pick it up!

If you have an understanding of who the Avengers are and who Steve Rogers is you should be fine. Just go into it knowing you don’t have to worry about back story and you’ll be fine.

Buy It- Really satisfying one off storytelling can be hard to come by but Warren Ellis has achieved in Secret Avengers #21. If you like espionage, giant monster fights and cool interrogation scenes I’d say pick it up.