Every week on Talking Comics we cull together all of the DC New 52 reviews into one article. Below are Bobby Shortle and Steve Seigh’s opinions on the DC Comics New 52 books for the week of January 4, 2012. 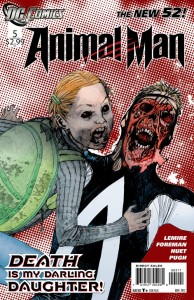 If you are only reading this to discover if Animal Man #5  continues its run as an engrossing and uniquely drawn narrative masterpiece then you need read no further because the answer is resoundingly yes. Jeff Lemire continues to deftly weave the intricacies of a family in peril with that of a threat that will endanger the entire world. Now, this may seem like the plot of every single disaster movie known to man but Lemire has done a simple but genius thing. He has not just thrown a family into danger but made them the epicenter of it. In War of The Worlds the aliens would be invading with or without Tom Cruise’s family, in 2012 the world comes to an end with or without John Cusack flying a plane but in Animal Man nothing happens without the Baker family.

This issue ends our introductory arc and it does so with the first real action focused installment of this entire series. In another writer’s hands the new found fisticuffs might have drawn attention away from the character focused nature of the book but Jeff Lemire, as said so many times, is not another writer. He manages to keep our heroes developing even as Buddy battles an agent of the Rot. This battle also establishes a classic adventure story trope; our hero is no match for his pursuers. If I know storytelling I know that in the future we get to see Buddy get his moment in the sun but if I know the storyteller at work this moment will not be what I expect.  Travel Foreman continues to astound me in the ways he manages to make my nightmares come to life. There is a sequence, when Animal Man is shown his daughter’s future if he fails, that feels like it was ripped out of Tim Burton’s imagination and translated to a page.

Buy it – There are plenty of reasons to love Animal Man but perhaps the chief reason is that it does everything a story is supposed to do. It’s all at once scary, touching and funny. 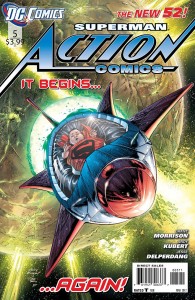 I’m not quite sure what is happening in Action Comics #5. The introduction is clear enough; We are once again re-telling Superman’s origin this time with a Morrison New 52 twist. Planted in this birth story is a revelation that Jor-El planned for Kal to be a super human in his new home, that he tried to escape with his family into the phantom zone and that there is something called “Brainiac” technology in the ship he sends his son to Earth on. Despite these, and a few other changes, this is very much the same story we’ve heard told many times. The real hook is that it’s being told from the perspective of the ship’s A.I. and that is also it’s downfall.

I’ve given credit to Action Comics for being one of the few New 52 books to fully embrace the reboot and give it’s most famous character a total overhaul. Setting the book at the Man of Steel’s inception has allowed me to graft onto his story like never before.  Last issue we were left with the world finally turning to Superman for help as some alien intelligence threatened our very existence. But instead of continuing that arc Morrison has decided to skip ahead to a battle with something called “The Anti Superman Army.” Maybe this is a storyline being established in the main line Supes book, and if so I’m sorry if this complaint seems unreasonable, but who the hell is this army? Furthermore who are the group of heroes with the Man of Tomorrow? From what I understand this is a two issue detour into present DC continuity and then in issue #7 we will once again return to the previous Action Comics storyline and finish that arc.  Confused yet? This is compounded by the aforementioned narrator which is a poor framing device. There is a detached and all knowing nature to the voice of the ship that makes me feel like I should care about the “fate of us all” but never offers a compelling reason to do so. It also forgoes any meaningful explanation of the odd treatment of narrative flow in this issue.  It’s a sloppy and unfocused way to tell a story which is incredibly disappointing after the air tight start this book had.

Skip it – I don’t understand why this issue exists. Did we need to retell the origin story again? Couldn’t have this whole thing have take place over two pages? This is sloppy and unfocused and the back up is no better. Stay away. 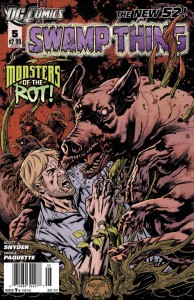 It’s hard to write reviews for books you truly love. It becomes a struggle to write anything except the same praise over and over again. Swamp Thing #5 is in that same grand tradition. It is, along with it’s spiritual counterpart Animal Man, the model for how to take a second tier character and make them more vital than nearly any of the first stringers. Scott Snyder has managed to get all the way to issue #5 of his excellent run without even once having Alec Holland use any of his powers. That’s right in a book called Swamp Thing  there has been next to no actual Swamp Thing! The wondrous thing is that, much like the delayed coming out in the new Ultimate Comics Spier-man, this hasn’t damaged the book’s entertainment value in the slightest. It also makes Alec’s bad ass moment in this issue all the more satisfying. I also want to give a shout out to Yanick Paquette and his interesting panel design. There is never one page that feels traditional or phoned in and it adds to the vitality the book constantly exudes. I’m also excited to see how this and Animal Man come together because, although they are dealing with the same enemies, their renderings of the imminent threat is quite different.

Buy It – Has been great and continues to be great. Scott Snyder is one of the best writers working today and his development of Alec Holland has been fantastic. 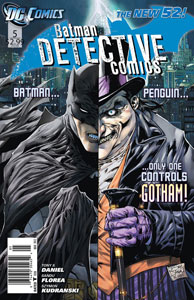 As you can see from the writing and art credits above, this month we are given a comic that has not one, but two featured plots happening at the same time. I wish that I could tell you that it was really exciting to see how both stories coincided with one another, or how cool it was to switch perspectives from Batman to some young upstart named, Strange, but I’m not going to. No, this month’s issue of Detective Comics really did almost nothing for me at all. With this being issue #5 and all, you’d think that we would be spending our pages furthering the plot, but we’re not. What we have on the Batman end of things is old Bats making his way through an angry mob and not much else.

The second portion of the book, I suppose, is happening just a few hours after the events in the first few pages, but feels like something completely separate. The only thing linking the two stories are the two Russian thugs sitting at the poker table inside of some basement casino. I was really digging the art of Szymon Kudranski in this half of the comic, that was, until Catwoman showed up. I’ve seen a lot of renditions of Catwoamn in my day, but it’s been a long time since I’d seen one as butch as the one portrayed here. The art used to depict her movements appeared very rigid and crude to me, and just wan’t very pleasing to the eye. By the time I had reached the final page my mind was a twitter with negative things to say about this issue but to be honest I just don’t have the strength. We’ve reached a point where these stories need to start making some really big moves if they want to impress people with this DC New 52 run, and Detective Comics just ain’t cutting the Bat-Mustard.

Skip it – There’s just not enough here to warrant spending your money with so little of the plot being built upon in this issue. I’m always up for the “slow burn” approach to storytelling if I get the vibe that there is going to be one mighty pay off in the end, but I’m just not feeling that with this particular Batman series. I’m hoping that they wrap up this arc really soon and try things again with another story. 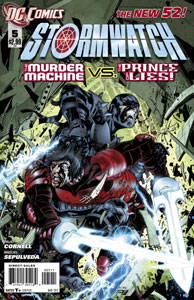 The Dark Side Part Five

It’s been well documented on this website, that up until issue #3 of Stormwatch, I pretty much wanted nothing to do with it. But then, things started to get kind of exciting. Beefs were laid to rest, the team began to function as a unit, all sorts of shit was blowing up, and overall it was finally worth tuning in. So here we are at issue #5 and we seem to have hit a bit of a dull patch once again. With the banishing of Adam, the leader of Stormwatch, by a member of the Shadow Cabinet, it’s time for the team to have a new leader. Unfortunately, the choosing of the new leader feels  rather anti-climactic. Not that I’m telling anyone how to write their comic book, but it would have been cool to see a new leader arise by way of their actions rather than just being chosen by someone of higher authority. I guess I”m really just of the opinion that the pages used to lecture each member of the team could have been better used.

The book picks up, albeit only slightly in it’s second half. Without question, one of the crowning aspects of reading this series has been the artwork of Miguel Sepulveda. Though, unfortunately, with the exception of  a heated exchange between two of our main characters, Sepulveda, really doesn’t get much room to show off his talent. I’m hoping that in the next issue we’ll be back to some more of those gorgeous double panels that made the first several issues so epic on the art side of the spectrum. I only stress this last part so much because for a short while there, the art was the only thing that kept me coming back.

If you’ve been following Stormwatch up until this point, and enjoy the series, you’re probably going to pick this issue up. We should be headed toward the finish line real soon I would imagine so you might as well right it out. The interactions between the characters is still decent and with the recent exchange of power within the group things could get real ugly real fast. It’s up to you whether or not you care enough to stick around for what’s to come.