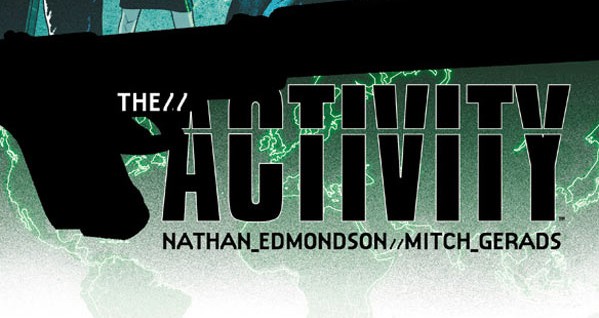 Fiddler on The Roof

Art and Letters by Mitch Gerads

There are few genre’s that lend themselves to episodic interpretations more than the “law enforcement team” story. CBS has practically based their network on it (well that and one horrible Charlie Sheen sitcom) Kiefer Sutherland resurrected his career with it and JJ Abrams arguably perfected it with his spy hit Alias. The Activity is a book that takes the globe trotting spy nature of Alias and crosses it with the mismatched team dynamic of something like NCIS. What results is a procedural spy story that left me feeling flat.

Writer Nathan Edmonson uses many of the usual genre trappings to introduce us to our team of “problem solvers.” Opening tease that gives a solvable mission for our crew? Check. Fallen compatriot to give the team a relatable emotional side? Check. New recruit who is used in the story to bring out back story in the other team members? Check. There is nothing inherently wrong with these conventions if they are used to shed light on interesting characters. Unfortunately, I found not one single member of the squad to be stand out in anyway. Their memorability problem is compounded by the odd choice to give each character multiple names before you’ve ever gotten to know them. I know that real agents have code names but I found myself having to constantly look back in the book to figure out who was who. Even now I would have to call them leader, girl, swarmy guy, other guy and new girl because none of their actual names have stuck in my head.

The plot itself is an excuse to show off a few nice gadgets and illustrate that our team is so elite that they are the ones who have to clean up the CIA’s mess. There are also a few flashback scenes that, at this juncture, seem pointless. They’re meant to set up our new recruit’s entrance into the Problem Solvers but they only show that she interviews, learns the stakes and then applies. There is nothing fundamentally wrong with the writing in those scenes I just don’t see it’s worth in a character or story context. If nothing else Edomndson nails the tone and structure of the spy thriller. He seems to get the pacing, locals and jargon that make the story feel authentic. It’s just a shame that the people populating that world aren’t more intriguing to me.

The bright spot of the book for me is Mitch Gerads’ art. He brings a cool and clean style that captures the feel of a modern espionage story extremely well. Nowhere in his pages is this more evident than in their very design. The location sidebars that kick off certain pages give the issue a feeling of propulsion. I can almost see these markers being swooshed or animated onto a television screen projected over sweeping beautiful vistas. A shout out also to the way he draws the face of the officer running the briefing because I really believed that guy was a grizzled military veteran.

Skip It – It’s a serviceable procedural piece that lacks enough up front story and character hooks to convince me to pick up issue two. The Activity #1 may have slick art, it may nail the tone of a spy/military thriller but it lacks the substance to be worth a buy.