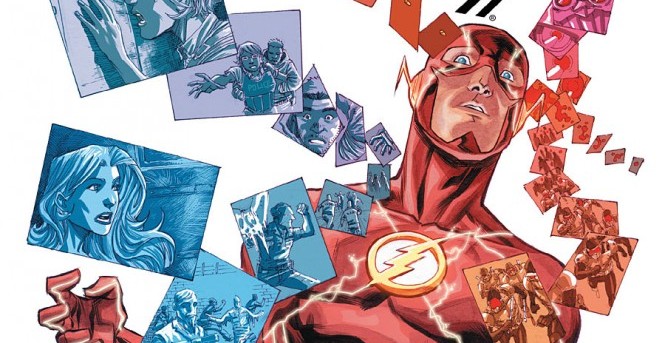 Creating relatable and engaging characters is a terribly tricky business. So I can only imagine that making super powered godlike men and woman relatable is a veritable minefield.  That is why the DC New 52 run of The Flash has been so damn impressive. Over the first three issues the writers have built Barry Allen into such a stew of bravery,smarts and earnestness that I believe he can give any hero in the DC Universe a run for his or her money. This great protagonist has been a major factor in the two predeceasing near-perfect issues of the scarlet speedster and while Flash #4 is not that same slam-dunk it’s still a highly entertaining and quality piece of comic book literature.

Writers Brian Buccellato and Francis Manapul decided to focus Mob Rule not on Barry Allen but on the troubled and multipliable Manuel. That character’s story has been intriguing as the catalyst for Barry’s current arc and so naturally, as the issue opened,  I assumed it would function well as the focus of it’s own book. Unfortunately it ended up being the stumbling block of the story for me.

Until now we have seen Manuel through the eye’s of our hero and thusly have felt a connection to his plight. With Flash taken out of the equation we see this person for who he really is; a selfish and ornery man who it seems only cares about his own survival. I believe the intention of this perspective switch was two fold. One was to take Manuel from that self serving place and put him on the path to being redeemed thus making him just as layered as Barry. The second was to do what so few comics do – pay off a cliffhanger. My main problem with the first decision is I never felt any sympathy for Manuel as a protagonist. I think thrusting him into the spotlight before he began to make that reformative journey may have done more harm than good.

This is a misstep but not a disaster because the book’s foundation of earnest emotionality still permeates every page. While I was not won over by Manuel as whole these is one instance where he lays weeping at the top of a page and his cascading tears create panels of their own. In these panels are memories of Barry Allen that not only enrich our iffy protagonist but also illuminate the past of the Flash himself. This marriage of art and writing is when The Flash stands it’s strongest. Francis Manapul’s work continues to astound in it’s beauty and it’s ability to affect emotion in the reader.

The union sings again when, like a breath of fresh air, Barry reenters the story. Here Buccellato and Manapul pay off of their cliffhanger with aplomb. The two writers have done such a deft job at making The Flash a real character that when he makes his final panel declaration I nearly stood up and cheered. Does this great ending get rid of my gripes with the issue as a whole? No. But if my main gripe is that the writers are trying to stretch and enrich their universe I think the book is going to be just fine. The bottom line is Flash #4  was not my favorite issue of this run but that doesn’t mean it’s not a damn fine book.

Buy It – I didn’t dig this one off protagonist switch but it’s still solidly written and beautiful to behold.