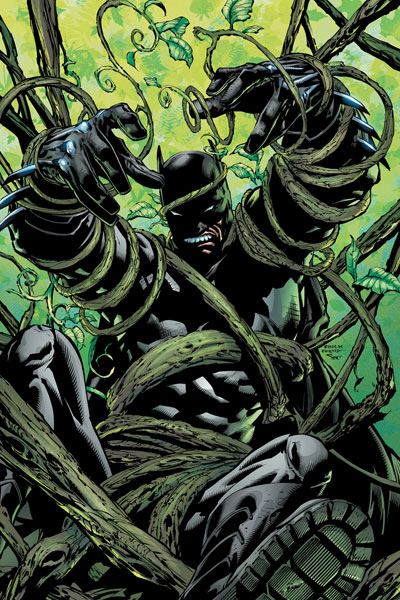 Issue Title: Welcome to the Jungle

If someone asked me to describe Batman: The Dark in just a few words, my unfortunate answer for them would be, “slow going”. It’s difficult to pinpoint what it is about this particular run of Batman comics that just isn’t bowling me over. Usually I’m up for anything Batman, but this issue has left me wanting quite a bit. I find that the story within these pages just isn’t moving fast enough. The distribution of information seems to trickle out like some leaky faucet in a Chinese water torture experiment. Perhaps that’s a bit harsh, but when there is a new Batman book on the shelf every single week, it really is gettting rather difficult to justify hanging onto this one.

This month’s issue was packed to the gills with lots of interior dialogue, Batman struggling with the repercussions of his actions and so on. However, I’m just not feeling the weight of his words in this particular arc. I’ve never known Batman to ignore so many friends and glaring issues all at once. I realize that he’s only one man, and that perhaps part of what’s driving this book is that he can’t be everywhere at once, I just wish that things felt a little more dire. I was shaky on the whole “injected villain” plot point from the get go, and, so far, not much has happened to pull me into that aspect of the story. It’s as if it’s taking Batman too long to get to the bottom of things.

It’s hard not to compare this book with the myriad of others within the new DC lineup. But when stacked up against the stories within Scott Snyder’s Batman or even Detective Comics, this feels like the weakest of the bunch. I’m really hoping that with the villain introduced in the final page of this issue that we’ll finally get down to business. If there is one villain within the Batman universe that I enjoy maybe even a little bit more than The Joker, it’s who we’ll get to confront in the pages of the next issue.

All of the inmates of Arkham Asylum have escaped and have been in injected with a serum that removes their fear. Batman is on the job but may be getting lost along the way.

Pass. I really hope that things pick up in the next issue for this series because a Batman book should never feel like a laborious effort, and that’s exactly where this is headed if it doesn’t step up it’s game.