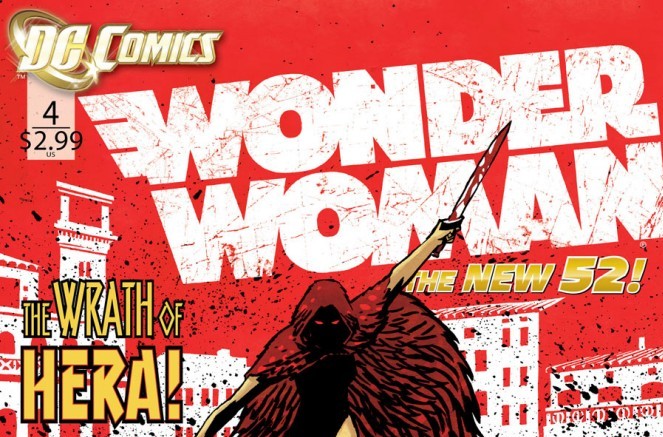 In our last podcast I had mentioned that I might be cutting Wonder Woman from my Must Read List of the DC New 52. But much to the dismay of my wallet, after reading issue #4, I am very much still on board. This issue divides up the two venues of our story quite nicely. After learning that her birth/creation was a lie, Diana hits the club with Strife, Hermes, and Zeus’ baby mama. I thought this was a rather odd place for Wonder Woman to carry out her brooding but the conversations within this scene are what kept me from rolling my eyes. Though, I will say this, why on earth is Strife tagging along with Diana and crew? Did she not hypnotize a number of Amazonian’s into killing themselves at the start of this story arc? Would you want to be chilling out with someone who just murdered a bunch of your friends? I think not. Perhaps it’s a deity respect thing, but I’m not quite so sure. I’d love for someone to explain that part of this story to me some time. Email us with your thoughts … please, I really want to know. Ha ha.

Beyond watching Diana rock out we’re treated to some pretty heavy handed consequences as back on the island Hippolyta squares off against Queen Hera. I absolutely loved the panel of Hera standing in the rain, eyes glowing red, her shall blowing in the wind. She looked truly menacing all attributed to the art of Cliff Chiang and smart coloring by Matthew Wilson. It is  in these moments when the two queens are exchanging sentiments and warnings that I truly enjoyed reading this issue. It’s probably because that in the back of my mind I know that we are dealing with gods rather than just mere super heroes, but the events that take place on Paradise Island are by far my favorite.

Wonder Woman so far isn’t going to make or break your comic collection, but the series seems to be heading in a direction that’s nowhere but positive. I know I’m often the over excited kid on talking comics, but if you dig into these stories the way I do it’s easy to find satisfaction in the bigger picture.

Check it out first – If you’ve been on the fence about Wonder Woman this issue may just change your mind, but then again it might not.