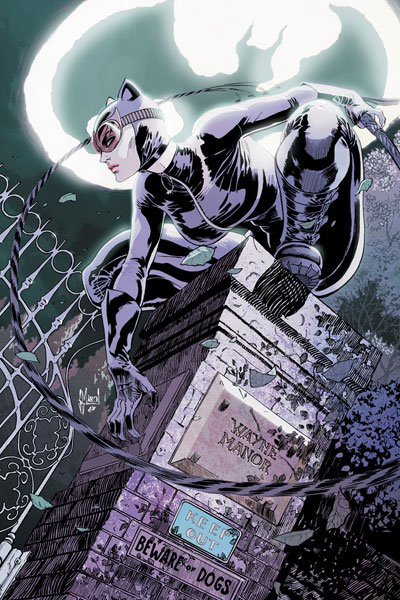 Allow me to paint you a quick picture: Your friend is dead, you’re found crying above her corpse and the cops have their guns trained on your pointy eared head. You have no choice but to propel yourself out of a glass window, several stories above ground, and hope that the saying about “cats always landing on their feet” proves true. Something I’m really enjoying about Catwoman, is that her character can’t seem to get away from the consequences of her actions. Leaving you with  very little opportunity for you to catch your breath, this issue piles on the content that will keep you foaming for the next several issues to come.

Judd Winick is reintroducing us to a side of Catwoman that is very rarely seen. Her vulnerability to the world she’s left herself with is what’s moving this book. Yes, the glory pages of her all flying through the air, doing her sexy Catwoman thing, are marvelous, but it’s so much more than that. The art of Guillem March, in my humble opinion, is some of the best art within the DC New 52 relaunch. Each and every page of Catwoman #4 is dark, but yet it remains fun and playful. I don’t think I’ll ever get tired of the moment when Selina swings her leg back, kicks a bottle of alcohol, and causes a small explosion from a bit of faulty wiring on the ceiling. The art makes these sequences within this series really flow. I know I’m not alone when I say that I enjoy any book that while I’m looking at it, I can just about see it playing out cinematically in my minds eye. Catwoman is one of the books of the New 52 that I’m able to achieve that with. So yeah, I dig it.

WHAT DO YOU NEED TO KNOW

You’ll need to know the events of the previous issues if you really want to get your worth out of this series. I think we’re that that point that until we move onto another story arc you’re going to have to be willing to catch up.

Buy it – No doubt about it, Catwoman #4 is worth having. Say what you want about the “over sexed” nature of the book but the story is great.