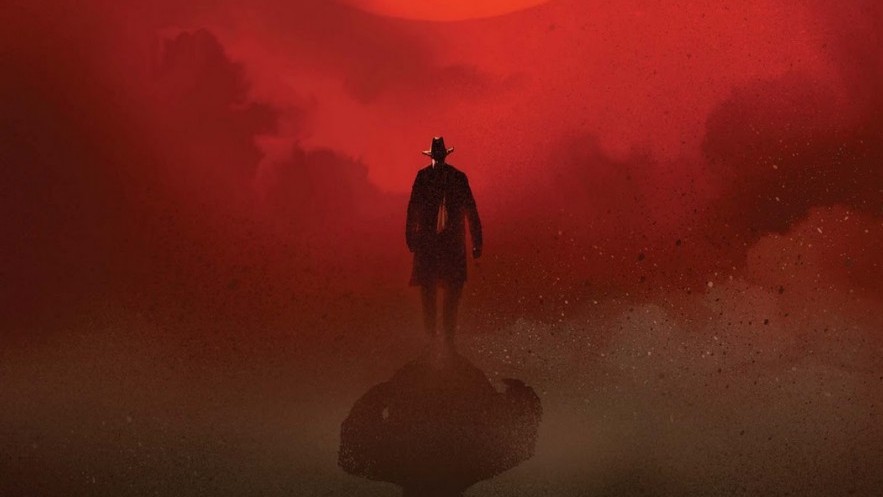 The Dark Tower: The Gunslinger #1

Ka is a wheel.

I had decided to put my work down, lay my head  upon my pillow and get some much needed shut eye until, like it has done so many times before, The Dark Tower’s song called to me. There are few narratives I respond to with more passion and dedication than that of Roland Deschain and my latest door into the world of the last gunslinger in Mid-World is The Way Station. It’s adapted from the first book in Stephen King’s epic fantasy tale by comic super team Robin Furth and Peter David. After many years of backstory the team has finally reached King’s first novel. I’ve loved the previous installments but I feared that there would be a real danger of the writers simply rehashing or misrepresenting this work of classic literature. That’s why I’m happy to report that Furth and David along with artist Laurence Campbell have managed to pull of a magic trick of a book; all at once being faithful to King’s work while staking out on their own superb vision.

There is a precarious tonal line to tow in recreating the feeling of Stephen King’s writing in the Dark Tower novels. In the pages of that tale he always struck a balance between bizarre humor and deathly serious drama. Above that King always made the journey of his main characters feel important. The result was that you as the reader felt like your time in the novels was time well spent. This kind of writing is difficult to achieve and deadly to try to recreate but someone Peter David’s script feels like a Stephen King novel. There is fervent importance given to not only the overall arc but the moment to moment interactions. You feel the severity of Roland Deschain but you also feel his ever loosing grip on reality. He’s thirsty, alone and frustrated which are circumstances that do not bring out the best in such a haunted protagonist. Those familiar with series know who Roland is and what he is about but for those few who pick up this title without having read The Dark Tower  I hope you realize you are being introduced to one of the great characters of modern literature. For me as a constant reader this is a everything I want my Gunslinger to be.

Laurence Campbell’s art takes the best elements of a Leone western and the bleakest vistas of Tolkien’s Lord of the Rings and combines them into a world that can only be the one I’ve read in the works of Mr. King. There is a uniqueness and flavor that is, oddly enough, hard to convert into words. If this is the only visual representation I get of these books (stay away Ron Howard) I could live with it. That’s how much I dig the art.

There is an awful lot to love about The Way Station as it retains the best parts of the book while  fixing some narrative confusions King baked in all those years ago. I think it’s a must for any Dark Tower die hards but I’m not sure if those who know nothing of the series have any hope of understanding what it happening.

It’s tough to say. This does begin at the start of the first novel in the series but there have been multiple volumes of work covering our lead character’s history. It depends on how the rest of the series shakes out but if it’s anything like The Stand series of books you should be able to start here and move forward.

Buy It – There is little I have to say that’s bad here. The writing is to notch,the art is unique and its wonderful fan service ego us die hard fans.