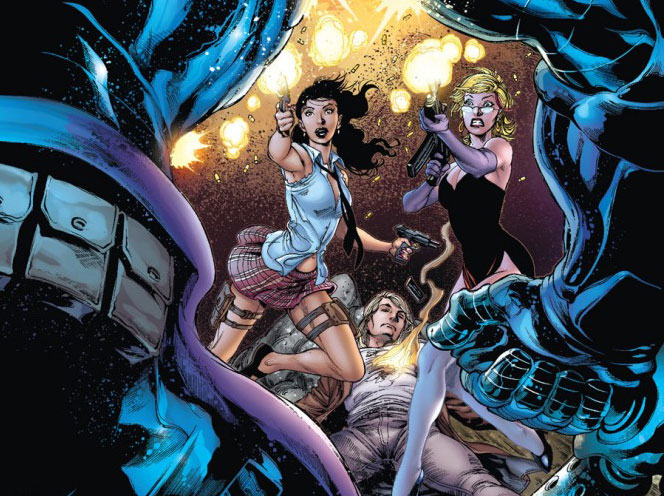 It’s been a month (obviously) since we’ve left the crazy world of Resurrection Man behind, but now it’s time to go back. Angels, demons, eternal damnation, bullets, broads, and trans-humans, oh my! Resurrection Man #4 finds us with the Body Doubles, Bonnie and Carmen, standing seemingly victorious over the tranquilized body of Shelly. As they’re about to extract his lifeless body the girls are interrupted by Daryl, ex super villain – all trans-human. What I like most about Resurrection Man is that the story keeps moving. Something is always getting revealed, characters go through radical changes (for the better), and there’s plenty of action that actually aids to the telling of the story, rather than just existing for the sake of having big splashy drawings on your comic book page.

At this stage of the game you really don’t know who you can trust when reading Resurrection Man. We know that Daryl has Shelly’s best interests at heart so I think it would be safe to say that he’s a character you can trust. But these other people that are after Resurrection Man are just bad news. Another thing to praise Resurrection Man for is that each issue leaves you wanting to know more. It’s a series in the New 52 where when there is a new one I’m genuinely excited to check it out. There’s nothing worse than reading a book because even though you know you don’t like it you still have to review it for the site you’re building. That’s never been the case with Shelly, The Body Doubles, or any of the other insanity that happens inside these pages. It’s good comic book story telling that moves.

Resurrection Man is down for the count but someone new is about to swoop in and save the day.

Buy it – While Resurrection Man might not be one of the absolute best of the New 52 it’s still a thumping good read. Each issue builds off the one that’s come before it in a way that has me coming back each month for more and actually looking forward to it. It’s totally worth checking out if you like good and creative comic action.