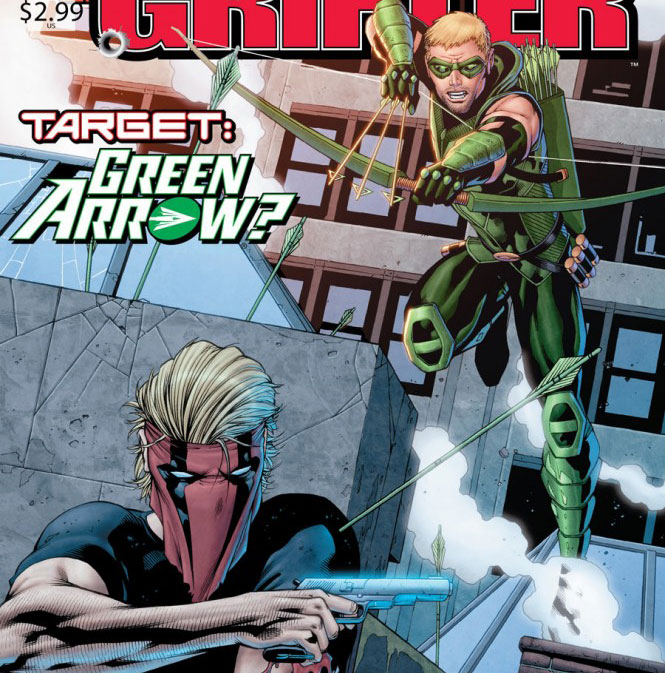 Grifter was a book that I first needed to warm up to. It took about 2 reads but I’d finally been convinced a few issues back that Grifter was something worth paying attention to. So why don’t I feel that same curious jubilation with this latest issue? Perhaps it’s that I feel like not much happened within the story? Grifter’s girlfriend is still being held hostage, we didn’t learn anything new about Daemonites, and the appearance of The Green Arrow was a little lackluster. It’s always interesting to see how “guest appearances” are handled within a comic. Is this a one time deal? Is The Green Arrow going to be a part of the equation for a while? Granted, these are all things that will only be answered in time, but with new comics coming out every week I’m beginning to wonder if this series is starting to head toward the “wait and see” rack.

Not that there’s anything particularly wrong with Grifter. He’s an okay character that has much potential, but the part of him that had me checking in on his character from month to month seems to be drifting away from me. By this I’m referring to his tendency toward having bouts of madness brought on by the alien voices inside his head. We don’t seem to have gotten very far in the mystery that is this alien force, and after 4 issues, that’s kind of starting to bother me. What exactly do they want? What makes Grifter so special. These are things we need to start exploring if this story has any hope of holding my attention for much longer. Now that some big things seem to be set in place it would be nice if we started to see some issues where we start knocking threats down like dominos.

Grifter’s girl has been taken, he’s hearing voices inside his head, and The Green Arrow is hot on his trail.

Wait and see. Grifter seems to be one of those runs that can’t seem to find a solid footing on where it wants to be in it’s story. With so many big things happening it would be nice to maybe focus on just one for a while and wrap it up. I’ll be curious to see what Grifter has in store for us next month but all the cool car chases in the world can’t make up for time that should be spent making the story more interesting.