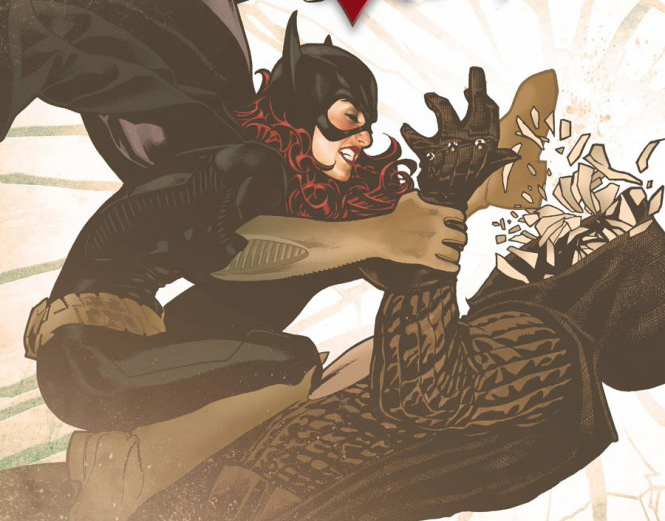 Title: An End to Dreams

It seems to me as if we’re coming to the end of the road for quite a few story arcs with these #4 issues in the DC New 52 run. Batgirl #4 is no exception. As Barbara struggles with her survivors guilt she still manages to find the opportunity to stage a final showdown with this arc’s villain, Mirror. Is it strange to say that my favorite parts of Batgirl are the moments in which she’s made to suffer? What I mean are the parts where we delve into her uncertainty. We’ve watched her toss and turn inside of nightmares, hurt innocent people because of her hesitation, and struggle with survivor’s guilt, all of it cleverly narrated throughout the story by our heroin. It’s been this aspect of the book that has kept me the most interested.

I should also mention that I’ve enjoyed the villain character of Mirror. While certainly not the most sadistic of baddies he still brought a twisted edge to his own brand of revenge. It would only be a slight push that would be required to crack this man’s sanity, and sometimes they are the most dangerous of all. His character design was rather cool as well. I always enjoyed the idea of him showing his victims their fractured reflections in his mirrored face right before they died. It was really quite twisted if you think about it. Good stuff. As much as I enjoyed this arc I’ll be happy to move on and see what more we can expect from Barbara as she re-acclimates herself to the super hero lifestyle. I have a feeling that in the next few issues we’re going to be getting a serious history lesson, because it looks like someone from Barbara’s past is coming to visit.

Batgirl is hot on the trail of the serial murderer, Mirror, and she’s decided that enough is enough. It’s time to stage a trap and deal with Mirror once and for all.

Buy it – If you’ve stuck with Barbara from the start of the DC New 52 there is no reason for you not to pick this up, as it wraps everything up on what we’ve seen so far. With a curious final page, I’ll be checking this out next month to see how Batgirl copes with her new house guest.