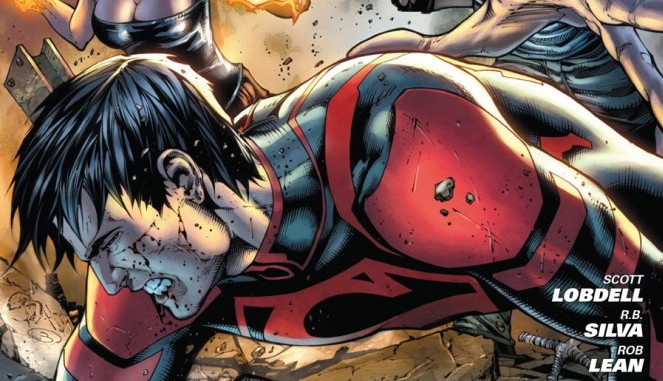 In last month’s review of Superboy I mused worriedly that Scott Lobdell might be confused about what kind of book he wanted to write. The character of Superboy seemed schizophrenic. He would in one moment be a sharp tongued teenager and then wildly switch into some sort of benign sociopath.  I believe in Mr. Lobdell as a writer but none of these intense shifts felt like purposeful characterization and so I left skeptical about the future of the book. Superboy #4 while not the best book I read this week still manages to right the ship enough to keep it on my reading list for next month.

Upon completing this month’s book I had a sigh of relief. All of those complaints about the sporadic direction of the character now seem like intentional stabs at gauging our hero’s inner psychology. There are big decisions he must come to by the last page and these character defining steps clear up the confusion of previous installments. This is mainly achieved through Superboy’s inner monologue which is the most character defining of any of the books I’m reading at the moment. Lobdell imbues Superboy with an insightful, natural and yet mannered voice that rises above the level of his other writing. It manages to navigate a lot of emotional revelations without inducing a single eye roll from this skeptical reader. Which is important because it’s those revelations that finally make the story feel as if it’s going somewhere. This is the issue where Superboy finally decides to become Superboy and I’m more than excited to see where that goes.

The end promises to finally pay off the Teen Titans crossover that was alluded to back in issue 1 and if Lobdell can successfully integrate those two stories I think it can absolutely take both books to the next level.

VERDICT
Buy It – The inner monologue is killer, the action is fun and the story is really starting to develop into something I’m interested in pursuing.