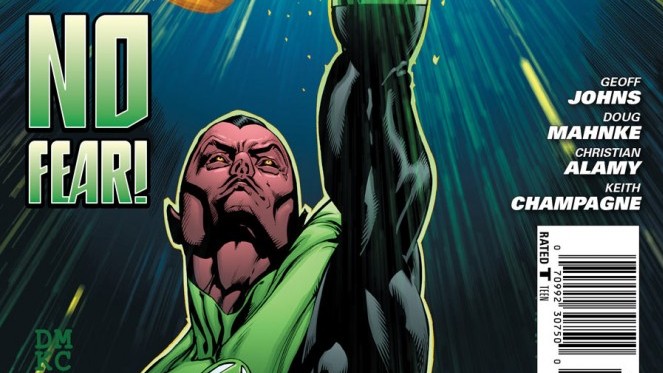 When people blindly criticize the New 52 relaunch I’m always quick to come to DC’s defense. I think the idea of restarting continuity and allowing new readers in is a fine idea. It doesn’t mean what came before is irrelevant it just means that it’s time to leave that stuff behind for a new set of consumers. In fact whenever I criticize the new 52 it’s for the complete opposite reason. I find it fundamentally flawed and pointless to call something “new” and to have it simply continue on from previous events. Geoff Johns’ Green Lantern is just one such book. It banks on many years of prior knowledge and affection while presenting a story that is too slow developing for its own good. Green Lantern #4 is continues this trend and thusly is an unsatisfying way to spend your $2.99.

The idea of Sinestro working with and relying on Hal Jordan is an interesting one and I also like the idea of seeing the pain Sinestro has caused on his home planet. The problem is that while both of these premises are alluring their execution is fundamentally flawed. Simestro part 4  does what so many issues do which is tread water for 19 pages and then give you two tantalizing pages of plot development to close out the story. This all in an effort to secure your purchase for the next month on the promise that “this is the issue that will really be great.” The formula is an embarrassingly common one in the comic book industry and if they ever want to keep a larger audience they need to fix it ASAP. I will say that, as always, Doug Mahnke’s pencils are wonderful but that just isn’t enough to carry Green Lantern #4 to anything close to a recommendation.

Skip It – It pains me to say this about another Geoff Johns book but I just haven’t been happy with the direction or tone of the writing. If you are a die hard Green Lantern fan I’m sure you will pick it up but if not I recommend staying away.