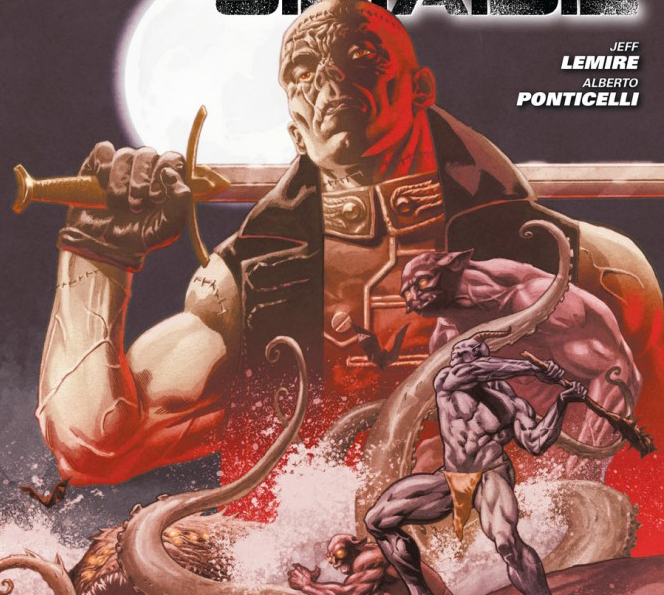 Title: War of the Monsters: Conclusion: Storming the Gates of Hell

The time has come for the epic conclusion of Frankenstein and his team of Creature Commando’s trip to Monster Planet. Since the launch of The DC New 52, Frankenstein: Agent of S.H.A.D.E. has been one hell of a ride. Smartly written by Jeff Lemire, Frankenstein is a book series that combines two of my favorite things: Classic Movie Monsters and enough blood and guts to keep each page dripping with action. This time out, we find the Creature Commandos split up into the respective groups as each faction attempts to destroy the remaining demon hordes of Monster Planet. Though, back on Earth the psychics that manage Frankenstein’s microcosm of a laboratory have all gone berserk as an unidentified force attempts to shatter their minds.

There’s so much happening in Frankenstein: Agent of S.H.A.D.E. and there isn’t any one event that I’m not totally invested in. The sheer scope of the book is outrageous and deserves to be praised. Monsters by the hundreds, worlds within worlds, classic movie monster banter, jabbing jokes, nods to the rules of classic horror cinema, and a universe that seems to get larger with every issue, are just a few of the wonderful things you’ll find inside this run. It will be interesting to see where the next story arc begins. If the tease at the end of the issue is any indication (and it usually is) we’re going to get some O.M.A.C. action happening, which should prove to be pretty sweet. In future issues I would love to see more of the Creature Commado’s explained. I really enjoyed learning about Dr. Mazursky’s involvement in the program and her evolution into the Mermaid we know her as now. With this in mind I would love to see farther back into the histories of the many enjoyable characters that make this such an enjoyable read.

All hell broke lose about 4 issues ago and it’s time to wrap it up in this satisfying conclusion to the battle on Monster Planet!

Buy it – There’s no doubt about it that Frankenstein: Agent of S.H.A.D.E. is one of the best reads of The DC New 52 and has delivered on each issue. There’s no question about it. If you love comic action with great writing, solid art, and lots of action then look no further!