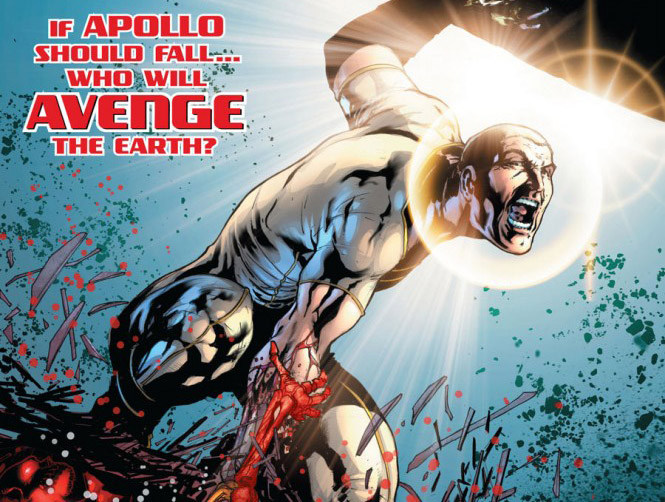 Title: The Dark Side Part Four

You know, if you were to tell me just a few short months ago that I’d be chomping at the bit for the next issue of Stormwatch, I’d have called you a liar. What began as something that felt more like a chore than a joy to read, Stormwatch soon began to change at the start of issue #3. All the little pieces began to fit together, as I came to understand more about the scope of what was actually happening inside the story. With each turn of the page I began to see a pattern, one that mapped a path toward these heroes becoming a functional team. The art of Miguel Sepulveda was always there for me, but now the characters and story were starting to make sense and I found myself delighted at the outcome.

With trepidation I dug into Stormwatch #4, and I’m happy to say that the upswing continues. Things are really starting to come together now. All the circumstances we’ve been reading about and have been threatened with are pushing the envelope and it’s either band together, or die. In this particular issue we get to watch characters resolve their differences not through many words, but by their heroic actions and team work. There’s a big nasty alien threat gobbling up everything in it’s path (including the majority of the Stormwatch team) and it’s left to The Midnighter and changed (for the better) Apollo to set things straight. I have to say, I like The Midnighter. I find him to be charismatic and quite funny even when he isn’t intentionally cracking jokes in the heat of battle. I’m also relieved at the change in attitude on behalf of Apollo as I know how much it took for him to fall in line, and now here we are watching him be the guy we needed from the start. It makes having gone through those issues with him at the beginning of this arc rather worth it.

Stormwatch seems to be planning some big things in the next issue. With promises of a final page that will change Stormwatch forever you bet your ass I’m on board to find out just what that means. It’s rather gratifying to know that this book has really started to pay out for me personally. With reading so many books here on the site it’s very simple to lose the focus of a story and find yourself just throwing new issues into a “I can read that later” pile. But Stormwatch has managed to work it’s way up from something I’d considered giving the “pass” on at least twice. I’m glad that it’s changed my mind and I simply cannot wait for the next issue. And you can quote me on that.

The Stormwatch team has been swallowed by a massive alien being and it’s up to Apollo and The Midnighter to set things right.

Buy it – If you’re still reading Stormwatch then this issue is going to continue it’s recent upswing from issue #3 and continue to push the envelope. With the promise of something major going down in issue #5 this one is not to miss.