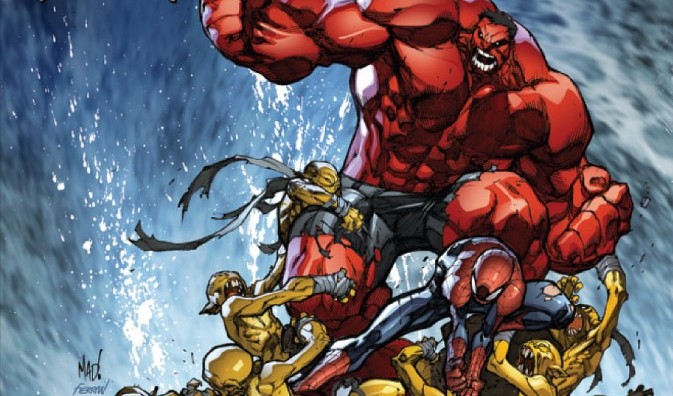 Comic books have always been dogged by the main stream perception that they are for kids. The idea that aside from a few landmark works, Watchmen, Dark Night Returns, they are a frivolous medium that is good only for distraction. This is of course ridiculous. One only needs to open an issue of Jeff Lemire’s Animal Man to know that there are deep and serious things happening in even the obscure reaches of the comic book world. I love the mature, serious and dark tones of these important works but sometimes it’s good just to read a comic book ass comic book. Avenging Spider-man is just such a thing. It’s an entertainment packed romp for start to finish and it belongs on every comic fan’s pull list.

In any story, whether it be comic book, novel or TV, I look for a few key elements. Is the plot believable, does the story follow it’s own rules but number one is character consistency. Do the people in this book behave in ways that feel organic to their character? Avenging Spider-man hits this point perfectly. J. Jonah Jameson, in the face of certain death, is the same harsh and pushy man he is when yelling at a young Peter Parker for not having his photos in on time. The most interesting thing is that in the context of staring down an underworld beast his unwavering dedication to being a stubborn ass is actually endearing. Red Hulk is a soldier who in times of stress thinks like a soldier and this stark contrast to Spider-man’s heart first approach leads to some great verbal sparring.  Writer Zeb Wells also remembers the most important thing about the web-head; that he would rather willingly go to his death  than let others suffer. This fact tends to get sidestepped for his witty quips but it has always been Spider-man’s most appealing quality.

I also love the art by Joe Madureira which fits the over the top style of the writing perfectly. There is no effort here to render realistic humans instead we are treated to stylistic approach that promotes big emotions. I especially love the expressiveness that Madureira gives Spidey’s eyes. I can see the full range of human emotion in those pupil less white ovals.

I cannot finish my review without stating just how funny of a book this is. Since my return to comics I have not read something that manages to be as consisstently humorous as Avenging Spider-man and it mangoes to do this while still maintaining credibility of tone. Fully worth the $3.99 price tag do yourself a favor and pick this up.

Buy It – It’s hilarious, cool and just a ton of fun. The character portrayals of Spider-man and Jameson are particularly stand out but the Red Hulk is no slouch either. It also has one of those classically awesome cliffhangers that leaves me salivating for next month.