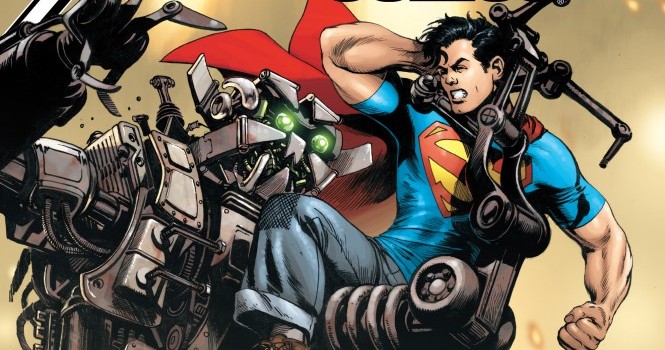 Title: Superman and The Men of Steel

Action Comics #4 is a book full of bombast and bad assery. With nary a quiet moment to be found this issue stuffs it’s pages full of nothing but beautifully rendered and breathtaking imagery. Penciller Rags Morales knocks it clear out of the park with what is hands down the best action in this run of Superman books so far. But that focus on intense theatrics comes at the price of character moments and I think Action Comics #4 is poorer for it.

First off let me just say that Superman and The Men of Steel does manage to correct the sloppy narrative choices made in last month’s installment. It’s no longer confused about what story it’s telling and that alone makes it a better read than issue three. The disappointing part is that writer Grant Morrison decided to forgo the crackling personality he established for Clark Kent when the New 52 launched in exchange for superhero as usual behavior. I enjoy seeing Superman throw tanks* at alien space craft as much as the next guy but what I love more is the personal time we spend with the Man of Steel. I will say that the revelation of what the alien’s were invading for was very interesting and I look forward to the consequences of those events coming in the issues ahead.

The lack of a relatable story is thrown into sharp focus by the rather excellent Hearts of Steel that wraps up the issue. This “backup” story written by Sholly Fisch tells the tale of Doctor Irons the man who created the Metal-Zero suit that is now leading the carnage in Metropolis. This detour into a secondary character is full of the kind charisma and emotion that Action Comics #4 is glaringly lacking.

The action is stellar, the art beautiful and the writing is sound, but it just felt off to me. On future reads I may come to appreciate the raw spectacle of it all, but for now I’m left wanting the more personal story I’ve come to expect from Grant Morrison’s Action Comics reboot.

Buy It – This is definitely a Rags Morales showpiece and he doesn’t diaspoint. I felt the personality of the book took a back seat but complaints aside it’s still a kick ass book. I’m also given hope by the last few pages promising more personal action coming soon.

*Was it just me or did Superman effectively murder soldiers when he threw that tank at the giant robot? Just saying.