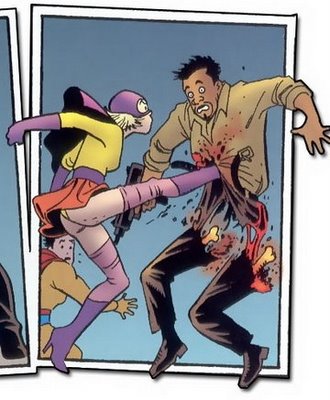 A higher power (literally) watches over the Earth and decides to make a bet with his companion that anyone has the potential to become a hero. To prove his point, he picks out a single mother who pays her bills through prostitution. She’s lewd, crude and downright miserable, but she one night after a particularly awful night on the streets, our hero awakens with superpowers. Not long after that, she is contact by the League of Honor (a spoof of the Justice League), which consists of The Saint (superman spoof), The Knight (Batman spoof), The Squire (Robin spoof), The Lady (Wonder Woman spoof), The Lime (Green Lantern spoof) and Speedo (Flash spoof). They ask her to join the team so that they can come together to fight the forces of evil.

Unfortunately for them, The Pro has a much different view on the world, since being a “Pro” requires a slightly different set of morals. Needless to say, the League of Honor has their hands full trying to teach The Pro the ropes and learning a thing or two about the world from a different perspective. All while fighting villains determined to destroy the world – villains with names like The Noun, The Verb and The Abverb… because all the other names were taken.

The Pro isn’t particularly awesome as a graphic novel. I don’t think I would read it again, but for a one time read, it was definitely enjoyable. Sometimes it makes you a bit uncomfortable to see what was going on, but the whole idea of a completely different perspective on the superhero world was interesting and refreshing. I know many people either loved this series or hated it, but I think I’ll just say that while I didn’t love it, I enjoyed it and I commend author Garth Ennis for taking a bold step towards pointing out the flaws behind the world of the superhero.

Nothing at all. Some history of the heroes being parodied might be necessary for maximum laughs, but really, it’s not mandatory to enjoy this graphic novel.

A bit raunchy, a bit WTF, but definitely worth checking out at least once.