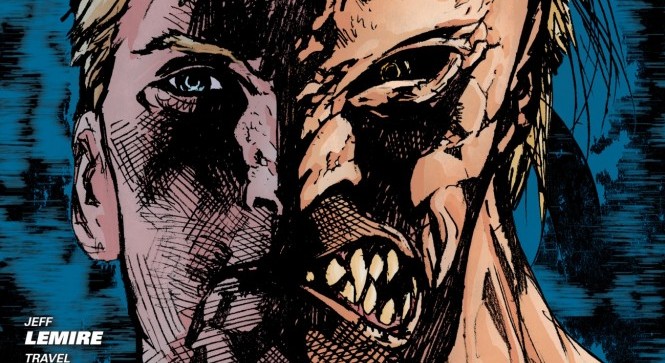 The Hunt part 4: The Rot

As a geek I have always found it easy to fall in love with works of fiction and in turn I’ve discovered it’s becoming increasingly more difficult to stay in love with those works. This issue stems form that nastiest of words: expectations. As an unsuspecting viewer, reader, or listener I can be swept off my feet by a susprising moment of genius but from that point on I expect no less from what I’m consuming. This leads to a large graveyard full of disappointing “could have been greats” and very few “fulfilled my expectations.” Animal Man #2 was one such instant of genius for me. When I finished that book I was left flabbergasted by how the tale of Buddy Baker and his family had begun to effect me. I was also left with a sense of dread. There was just no way the next few issues could live up to what I had just read. Issue #3 hit and was just as strong and so I felt cautiously optimistic and now having just finished Animal Man #4 I can say definitively that this comic is setting itself up to be one of the best things I’ve ever read.

Jeff Lemire’s ability to mix action,horror,adventure and family drama into one delicious stew of a story still shocks me even four issues in. He has created not one, not two but five characters (one of which is cat) that I can’t stand seeing any harm come to. Lemire has made this a story about family, about protecting what you love and more than anything fighting to protect what’s important to you. Buddy Baker is a superhero who is facing something he doesn’t know how to conquer and like all great adventure stories the fight seems hopeless. I don’t know where the narrative is headed but I do know that I can’t wait to go on the ride. He has also set in motion the beginnings of a cross over with Scott Snyder’s Swamp Thing that honestly has me more excited than the announced X-Men Vs. The Avengers storyline.

Travel Foreman continues to excel at bringing the twisted and frightening creatures of the Rot to life. By making them all disgusting bulges, writhing tentacles, and twisted shapes the artist manages to bring a real sense of horror to the book. There are moments in his panels that if pictured in real life would be on of the scariest things you had ever seen. The creatures of the Red are equally as twisted but somehow Foreman manages to make them more impressive than terrifying. This see saw wire act is a true testament to his confidence and prowess as an artist.

Buy It – My only complaint is that it’s painfully difficult to come up with praise that hasn’t all ready been heaped upon Jeff Lemire and Travel Foreman’s brilliant work. The first three issues sidestepped the pitfalls that a lot of other new 52 books got trapped in and issue four continues its smooth sailing towards classic status.