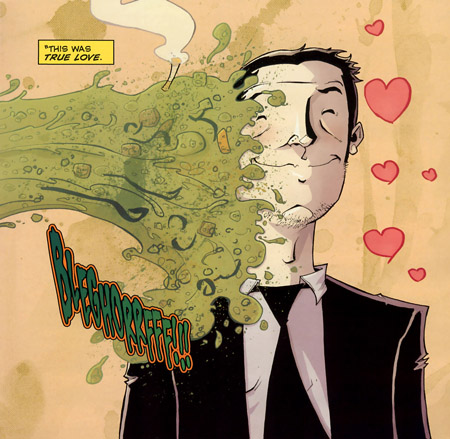 A while back I picked up Volume 1 of a comic distributed by Image Comics called Chew. If you’ve heard of it, you’re likely to know how incredibly awesome it is, if you haven’t, I’m assuming that’s probably why you’re going to continue reading through this review.

Many of the characters in the story, including Tony Chu have fictional powers that have been created for the purpose of making the story a little more interesting.  Tony is a Cibopaths – which means he gets psychic impressions from whatever he eats allowing him to see its past. Amelia Mintz, who plays the love interest of Chu, is a food critic and also a Saboscrivner (someone who can write about food so accurately that people who read it can get the sensation of what the food really tastes like). Amelia once caused a whole city to get food poisoning because of one of her reviews. The world of Chew also has characters with other food related powers as well. But I don’t want to spoil any of it for you, so you’ll have to pick up the comics if you want to find out what those are.

Now, the world that Chew is set in is a world where all chicken and bird related meats are banned after 23 million Americans are killed through a bird flu that was spread through the meats. The F.D.A. is a full-fledged F.B.I.-ish force that is tasked with seeking out all the black market bird meat and chicken smugglers.

As weird as the story seems, it’s such a refreshingly original concept and I enjoyed reading it very much. The art is great and the characters are fun and interesting. I find myself wanting to pick up more just to read about what happens to them, not even so much where the story goes (although that would be nice too). It’s basically a series of murder mysteries and poultry related crimes that mesh into a graphic novel containing suspense, humour, action and general awesomeness.

Well, as far as this series goes, you’ll definitely need to start things off with this first volume, but as long as you’ve got this one under your belt, the rest of the series should make sense to you from here on out.

A super fun read and although it will make you a bit squeamish, it’s definitely worth checking out.