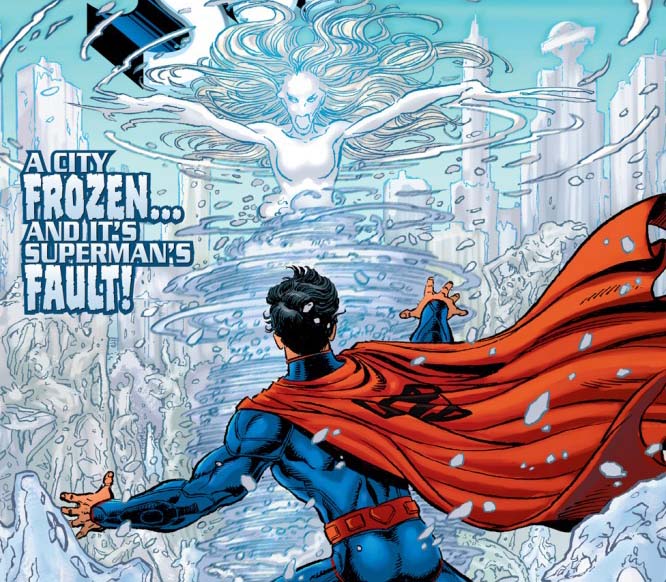 “A Cold Day in Hell”

Throughout this New 52 experiment, I’ve been disappointed and perplexed by this new Superman series. Terrible narratives, subpar artwork and a character-less Man of Steel has left me wondering why this Superman even exists, especially considering the awesome we’ve been pouring over every month with Action Comics. Unfortunately, this issue doesn’t fix any of these issues, and at this point, I’m ready to walk away from the man in the red underpants and focus on his earlier exploits in Action Comics and Justice League.

Earlier exploits, you may wonder? Well, in an almost-imaginative opening sequence, we’re given context for when this Superman takes place, that is, some years after the events of Action Comics. Unfortunately, I was already comparing the two books for the last couple of months, so given such a direct line to Action Comics only further illuminates how sub-par this iteration of the Kryptonian is in relation to his younger self. Moreover, in showcasing renditions of scenes from Action Comics, the lackluster artwork in the elder Superman’s series is even more brightly exposed. Action presents the son of Jor-El in vivid, dynamic frames bursting off the page (or screen), while Superman’s more nostalgic turn has always felt stale, at best; lazy, at worst. Seeing both Superman’s in one issue, however, throws light on just how mediocre the artistic direction is within the elder’s books.

Shortly after the flashback sequence highlighting Kal-el’s past exploits, Issue #3 falls into the same pitfalls as earlier issues, particularly the irritating, ever-changing narrators. Last issue, we had Supes recollecting his adventures for posterity’s sake (I guess?). In this third issue, the narrative changes voice three (yes, three!) times over the 21-page spread and wore out both my patience and welcome of this series. I know I’m beating a dead horse at this point – I’ve whined about this for the last three issues – but I can’t help but feel as though Perez thinks we readers are dumb and will swallow whatever drivel is released with an S logo on it. Needless to say, it’ll be a “cold day in hell” before I pick up another book from this series.

I went into this series thinking it was going to be a slam dunk: I love Superman, I really liked Action Comics and I was ready for a great rebirth of an American icon. What I’ve read through over the last 60-odd pages is more akin to Superman For Dummies rather than the tremendous effort being put forth by the team handling a younger Man of Steel. If you want the definitive Superman of the New 52, skip this series, pick up Action Comics, and forget this series altogether.