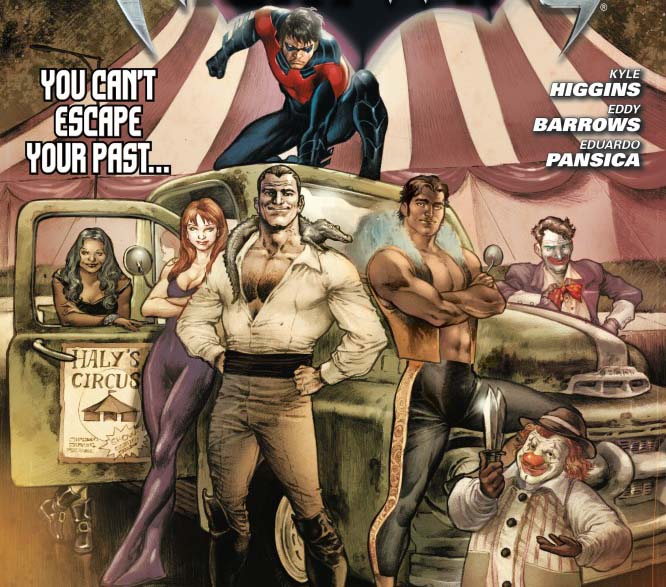 I know my reviews of Nightwing have been bordering on hyperbole, but I truly feel this series is piecing together one of the better arcs of the New 52 and I find myself more and more satisfied with every new issue. What Higgins has smartly presented us with is cause and effect. The actions of one book directly affect the events in the next. Unlike a book like Captain Atom which seems content to offer vignettes of a whole picture rather than tell a good story, Nightwing gives us the facts of the case and brings us along for a wild ride led by Dick Grayson. In other words, Higgins is giving us great characters cradled by good, old fashioned story-telling.

The clincher for me with Issue #3 is that we see Dick doing what every great Batman protagonist does: detecting. His search takes him from Atlantic City, to Gotham, to Chicago with well-paced intention. Each city feels different, and by the time we get to the Windy City, we feel as out of our element as Knightwing must.

Dick’s travels, in themselves, create great symbolism: Atlantic City is base to Dick’s past, Gotham is the stage for Grayson’s present, and Chicago will hold a key to Nightwing’s future. Simultaneously, Chicago houses another figure from Dick’s past, Zane, now one of the biggest assassination contractors in the city. The ways the story weaves and folds into itself is one of this series’ strongest characteristics. It’s also forced me to revise a statement I made in my first review that this book didn’t feel like a proper reboot of the character. What Higgins has composed in his Nightwing run is actually one of the better restarts in that Grayson is revealing pertinent information about his origin story while actively participating in a current mystery. I guess I expected a more straight-forward origin, but I’m much happier with the route Higgins takes. Swamp Thing is the only other book I’m currently reading that utilizes similar methods, sharing bits of information from the past in the context of what’s occurring in the current conflict. Strangely enough, Swamp Thing is also one of my more favorite books…

Nightwing reaffirms my love of comics. It’s beautifully drawn, creatively written and believes in the intelligence of its audience. I couldn’t be more excited for Issue #4. Buy it!