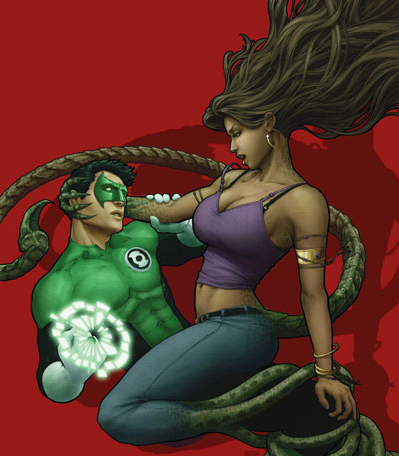 Title: Into the Light

With the promise foretold of last issue, that The Green Lantern would be joining the fray, I was really hoping that Voodoo would make it’s way into a book worth reading. Sadly, this issue did very little to pull me into her alien world of deception and tight fitting clothes. The problem with Voodoo is that she has very little personality for a lead character. Her mission is to study the heroes of our world and report back to her alien people with information that might help them conquer the planet Earth. If that’s the case then why aren’t we seeing her actively watching our heroes?

So far, all we’ve seen her do is sleep with law enforcement officials, kill an insignificant character or two, and that’s pretty much it. The writers don’t really seem to be using her unique ability to take on the guise of other humans to move the story forward. At the end of each issue Voodoo really just makes me wish that I’d gotten more for my $2.99 that could have been spent to check out some other characters adventures. I don’t quite understand how you can call this issue Voodoo vs. The Green Lantern when in actuality they barely fought one another. That also brings to mind the glaring problem I have with this book. The Green Lantern portion of the comic is so much more alive and interesting than anything else going on and it’s not even his book.

Also, if you’re going to call the issue Voodoo vs. The Green Lantern you might want to have the two characters actually duke it out rather than just standing around talking to one another. For what could have been an upswing in the story of Voodoo the whole encounter just felt flat and near pointless other than to let Voodoo know that she’s being watched. Meh.

Voodoo is able to assume the identity of anyone she touches and she’s monitoring Earth’s mightiest heroes … or at least she’s supposed to be.

Skip it. Personally, this is issue #3 and with hardly anything happening to keep me interested I’m ready to give up. Even if you love the Green Lantern, it’s hardly a reason to get involved in this character.