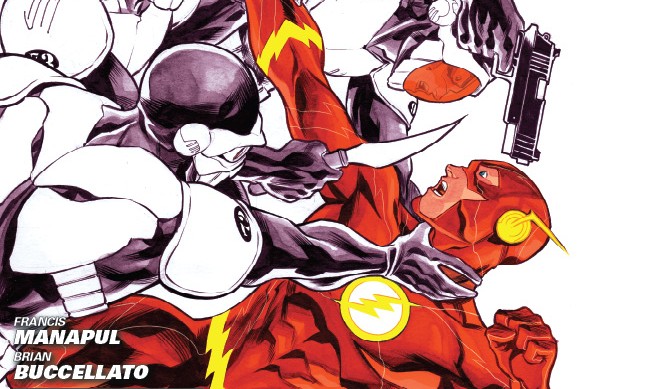 If you ask people to describe the top tier DC superheroes you might hear something like this: “Superman is amazingly strong, has the power of flight and can shoot red lazer beams out of his eyes, Batman is a normal man with the mind of a genius and the fighting skills of a ninja, and Green Lantern has a ring of power that affords him the power to bring to life anything he can imagine.”  But ask someone to describe the virtues of The Flash and you usually only get back: “He runs really fast.” Of course this is a major part of his repertoire but it’s far from his most impressive. One only has to read the opening of Brian Buccellato and Francis Manapul’s Flash #3 to be given a hint of what The Scarlet Speedster is really able to do.

If you go back and read my review of Flash #2  you will see I extolled the virtues of the dynamic art and sharp writing; I’m happy to report both those elements return in full force here. Last month’s cliffhanger ending is also carried over and, unlike most cliffhangers, is paid off in spades. There is a pace and momentum to these opening panels that is unmatched in any other New 52 book. I love that we get to see Barry out of costume being brave and doing good police work. If I had to levy and sort of criticism at The Flash #3 its that it felt short to me. I seemed to get from the breathtaking opening to the stunning ending in no time at all. But maybe that’s just because I wanted more of a good thing.

A lot of number 3’s have fallen flat this month but The Flash #3 is brisk, inventive, welcoming and stands as living proof that reinvention does not have to be synonymous with the destruction of all we know and love.

Buy It – If you are behind catch up, if you are waiting and seeing wait no more. This along with Batman and Animal Man should be on everyone’s pull list.